No time to stand still

Josh McKay knew early on that he wanted a career in hospitality, but the development of the Vintage Rooms at The Plough in Hillsborough has given him the perfect chance to shine…

Like many of the bartenders who appear in this feature, Josh McKay has been involved in the trade from the outset of his working life.

And in Josh’s case, he’s been working with the same pub and restaurant group since he began his career six years ago.

He’s now bar manager at The Vintage Rooms – the most recent attraction at the Patterson family’s Plough Inn at Hillsborough – but he’s been with the group since he took a student job at The Tannery in Moira when he was 17.

“When I left school at 18, I realised that I had an interest in hospitality,” Josh told LCN this month. “I went to Belfast Met and did a foundation degree in hospitality management and then went on to university and did a degree.”

During his last year at university, Josh took on a full-time post at The Tannery and last year, he shifted his base to The Plough and became supervisor.

“I was definitely always more interested in the drinks and cocktails side of things,” he said. “But I didn’t really have the opportunity to get properly involved in that at The Tannery because it was food orientated.

“Since coming to The Plough though, I have done a number of wine courses and I’ve competed in the Diageo World Class event to see what the standard was like and to get some experience.”

Cocktails are a big part of the offering at The Vintage Rooms and the first menu was a taster which contained a fresh take on some classic cocktails, such as the Smoked Rum Old Fashioned.

“We’re now in the middle of drawing up a new menu and we’re going to take things to the next level,” reported Josh. “We’re using a lot of spirits and liqueurs to spark people’s interest, we want to bring them on the journey with us and educate them a little along the way.”

Josh finds that if a drink is made well and contains premium spirits, then customers are happy to pay £10 or £12 each time:

“We have people coming in to us now who will happily buy six or seven gins during an evening,” he says. “People will try different things and they are happy to spend a bit more if it’s mixed properly….They are also more engaged if you can tell them the story behind the drink, that’s particularly true with gin.”

For Josh, the hardest part of the job is probably time management – getting time do everything can be difficult, he says, but he credits Plough general manager, Andy Carson, with helping him most in his personal development:

“I’ve learned more in a year from Andy than I did during the previous three or four,” he adds.

“As a bar person, you have to have passion, you can’t be there just for the money, you have to be reading books and doing research. I might finish in here at 5pm, but then I would be researching what’s going on in Dublin or London and finding out about the new ways they are doing things. You need to be looking around for ways to improve yourself and your bar,”

As for likely trends, Josh says that he thinks barrel-aging could be the next big thing. Some of that already goes on at The Vintage Rooms, but it could become a lot more popular. He also predicts that tea infusions, where tea leaves are mixed with various spirits, will gain traction and tequila and rum will come much more to the fore in the next couple of years.

In terms of his own personal ambition, Josh says that he has no plans to move on from the Plough Group just yet:

“I want to learn as much as I can, then perhaps move on to a higher end bar in Dublin or London to further my skills,” adds Josh. When it comes to his ultimate ambition, there’s no talk of owning his own bar as yet, but he does see himself progressing to the level of general manager.

Add all the ingredients to a shaking tin. Shake and double strain over large ice rock and serve in frozen coupe glass. 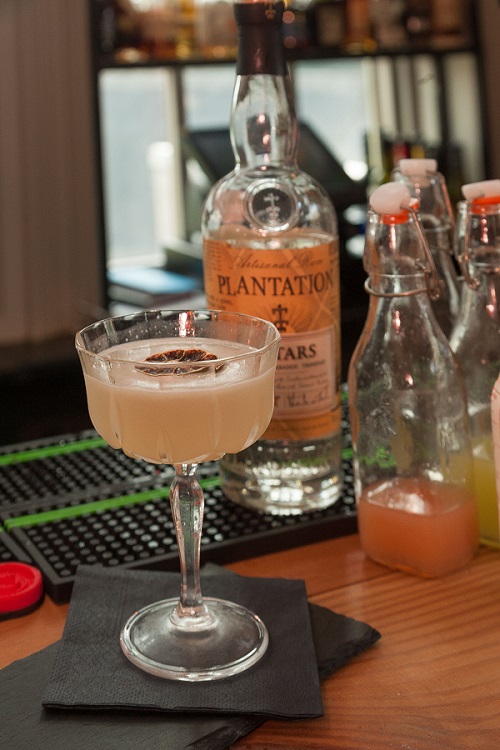