in Barperson of the Month
0

Nicole Kane is another of those candidates for this monthly slot whose fascination with the bar trade was sparked at an early age.

The niece of well-known Belfast publican, Janine Kane, Nicole Kane began work lifting glasses in her aunt’s bar – The Spaniard – when she was 14-years-old. By the time she had reached 17, she says that her interest in hospitality as a career had begun to grow and after she’d completed her A-levels, she approached Janine with a request for full-time employment.

Janine took her young charge on and began to show her more about all aspects of the trade, including back-of-house systems. Nicole readily took to the work:

‘I just went from there, I started to work full-time and it was soon after that I started to develop a real passion for making drinks,’ says Nicole.

At the age of 20, Nicole moved from The Spaniard to a new supervisor’s role at another of Janine’s bars, Muriel’s, in Church Lane.

‘That brought a big change in responsibility,’ she recalls. ‘Being in charge of a team, day in and day out and looking after the shifts, it wasn’t like anything I’d been used to before, it brought a real a change of pace.’

Nicole soon moved up to the role of senior supervisor where she stayed for around 18 months before leaving the venue for a job in the cocktail bar at the nearby Merchant hotel.

‘I’d really got into cocktails and I kind of wanted a bit of a change,’ she says. ‘The cocktail bar at The Merchant seemed like the only place that was better than we were at the time. I was in there for about three years doing various things and I learned a lot, such as how to manage a team that’s not full of your friends. Managing people I didn’t know was a big change in management style for me.’

When she was 24-years-old, Nicole was welcomed back to Muriel’s as venue manager and she’s been there ever since.

‘I know that Muriel’s is family-run, but no matter who you work with in the trade, it feels like a family anyway,’ Nicole remarks. ‘You see these people more than you see your own family.’

She believes that Muriel’s is in a process of continuous improvement. It’s ‘a bar with its own vibe’, she says and its popularity has only grown since it became involved with the Belfast Food Tours.

‘I think the standard of bartending generally in Belfast is great now, especially when you compare it to other cities such as Dublin or Edinburgh. We are definitely up there,’ says Nicole. ‘It’s great, and people have this passion about it. We do have problems, I know it can be hard to find people at the moment that want to make this a career, but all the staff that we have now are fantastic.’

As for the future, Nicole says that ultimately, she wants to own her own bar. It would be ‘something quirky’ she says, and something that’s not been seen in Belfast before with its own features and back story:

‘A lot of the bars now are all very similar and I think it’s nice to have places that really stand out. That’s something that I really think we have now at Muriel’s.’

A smoked salt and chilli rim.

Add all the ingredients into a tin, add ice and shake thoroughly until sufficiently chilled. Fine strain into a coupe glass rimmed with smoked salt and chilli and serve. Enjoy! 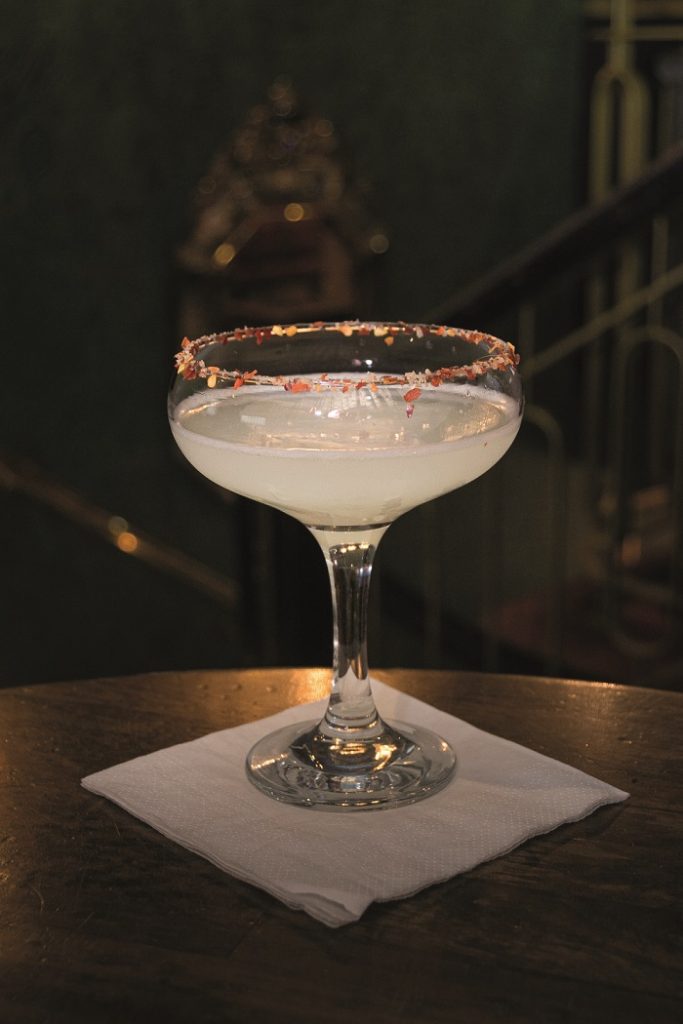 Coronavirus takes a toll on hospitality

Coronavirus takes a toll on hospitality