Like many in the trade, Sean McGuigan (25), came into bar work almost by accident.

Sean McGuigan was born in Belfast and studying for A-levels when he began to work part-time at the Four Winds near his home in the city. He was around 16 at the time and he stayed at the venue for the next two years.

‘I did fall into it I suppose,’ he told LCN this month. ‘I had friends that worked in the industry, but after a while, I began to enjoy it and it’s been a passion of mine ever since.’

When Sean eventually went off to Liverpool to attend university, he continued with his bar work, finding a position at McCooley’s, a prominent Irish bar in the city, and subsequently, at a number of other venues.

He returned to NI at the age of 22 and began working behind the bar at The Chelsea on the Lisburn Road. The manager, Terry Loughran had been manager during his days at the Four Winds and he stayed there for the next six months before returning to the Four Winds where he spent a brief spell in a management role.

After that, there came a short hiatus during which Sean left the hospitality trade altogether and went to work for the Child Maintenance Service for the next eight months:

‘At the time, I just wanted to try something different and this opportunity came up,’ recalls Sean. ‘But I found that I missed the bar and I eventually went back to the trade and a job at AMPM.

‘That was very much a cocktail-orientated venue and it was during this time that I got a lot of my experience. During the Christmas period, I worked the rooftop bar [The Treehouse] on my own.’

By this time, he was 23-years-old and an eight-month posting at city centre venue, Ten Square followed before he found himself just up the street a little, working behind the bar at Flame restaurant.

‘It’s very busy here and it’s very different from the other places I’ve worked,’ says Sean, who points out that Flame’s central location means that it gets a much higher ratio of tourist customers than many of his former venues:

‘That means we get asked for a lot of different cocktails which you might not normally get asked for,’ he adds. ‘That can be testing and it’s a challenge, but it’s a great place to work and I enjoy it.’

Sean believes that generally, the standard of bartending in the trade across Belfast has improved many-fold in recent years:

‘I think people are beginning to realise that this isn’t the easy job they might have once thought that it was,’ he adds. ‘Your experience says everything about you…Nowadays, we have these very unique cocktail bars for people to experience and that’s great. New bars are opening up every week and people don’t mind paying that bit extra when they know that staff are putting the effort in.’

As for the future, Sean says that he can certainly see himself at the helm in his own business venture, probably a restaurant:

‘I wouldn’t mind that,’ he remarks. ‘I have the experience, I know how to run the floor in terms of food and beverage, I’ve been there and done that, so I think I could manage it…I think my place would be old-fashioned, a unique cocktail bar with a relaxing vibe, somewhere that you could go for a cocktail and maybe some food with no pressure put on you, you’d be left to your own devices…’

Shake the ingredients and then fine strain them into a coupe class. Enjoy! 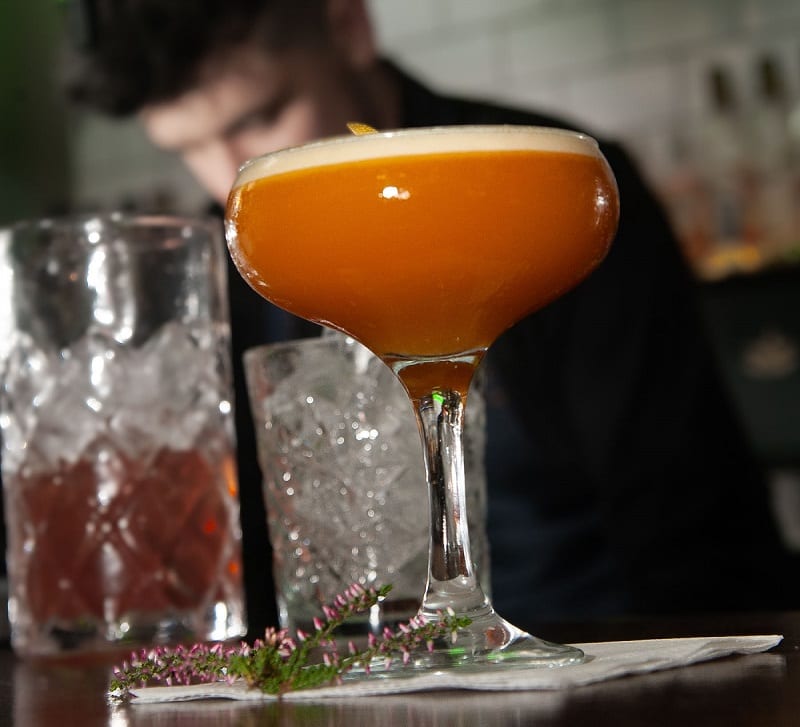