Matt’s in for the long haul

Like many of his industry colleagues who have appeared in this column, Matt Knight (29), has been associated with – and dedicated to – the hospitality trade since his teen years.

Now head bartender at the recently refurbished National in Belfast, Matt Knight has been intrigued by the trade since he secured work as a waiter in The Hillside at Hillsborough when he was 18. Not long after his arrival, Matt was transferred onto bar work and he quickly took to the role.

At the time, he was studying history at the former University of Ulster at Coleraine and like many students, bar work was a vital source of additional income.

After leaving The Hillside, Matt found work at Del Torro in Lisburn, working on the floor and behind the bar, and two years later, he moved to a new post at Filthy Chic on Belfast’s Dublin Road. Initially, he worked as a glass collector but very quickly, he got the chance to go behind the bar too, and it was here that he first began to really learn the mixologist’s art.

Matt formed a strong relationship with his manager at the time, Jamie Kirk, who was happy to give the aspiring young bartender some valuable early experience on quiet mid-week nights.

‘To be honest, this whole thing started as just a way to make extra money, but I quickly found that I really enjoyed the work and the kind of lifestyle that goes with it,’ recalls Matt. ‘I became good friends with Jamie and the other guys that worked at Filthy’s and we spent a lot of time together, which I really enjoyed.’

After about a year at that venue, Matt was on the move again, spending the next three years or so alternating between the former Aether & Echo, Apoc and Love & Death.

‘I learned a lot more there,’ he says. ‘A lot of what they did was very classically orientated. We hadn’t been used to doing a lot of prep work at Filthy Chic, but at A&E, you learned about how things are made and about being creative. You made up your own drinks, you didn’t just stick things in a shaker and shake them. It was a great experience, working with a lot of great guys.’

Eventually, however, Matt became restless again and like many young bartenders, he began to look outside NI for a fresh challenge. He has family in Brisbane, Australia, and in July 2017, he flew out there for a two-year working holiday.

For the first year, Matt worked in a cocktail bar in Brisbane and then, after completing six months of compulsory farm work as part of his visa requirement, he move to Melbourne for a year. Initially, he worked in ‘a wee dive bar’ before relocating to the Bluebonnet barbecue restaurant for the last six months of his stay.

‘I worked as a senior waiter here and it was a good job, the food was excellent and they had a very nice drinks programme. This was a really popular, modern venue and I also got to spend some time behind the bar,’ adds Matt.

As his visa came to an end, a friend back in Belfast told him about a vacancy at The National which Matt subsequently secured:

‘That was pretty much it,’ he told LCN this month. ‘I’m still getting used to how much Irish people drink compared to Australians and the job is harder here, even compared with a busy night in Australia. The people there are very laid back and they drink more slowly. Here, it’s a bit more intense, but that’s good. Sometimes, in Australia, you’d get bored just waiting for people to actually start drinking.’

As for the future, Matt says he’s keen to stay hands-on behind the bar:

‘I don’t really fancy a general manager’s job or anything like that,’ he adds. ‘Maybe in a few years’ time, I could look at managing a couple of venues as a beverage manager or something like that, but I still want to travel as well, maybe to Canada or the States, so I am keeping that in mind.’

Add it all to a tin and shake hard without ice. Then shake with ice and fine strain into a sour glass. Then sprinkle raspberry dust over the top and enjoy. 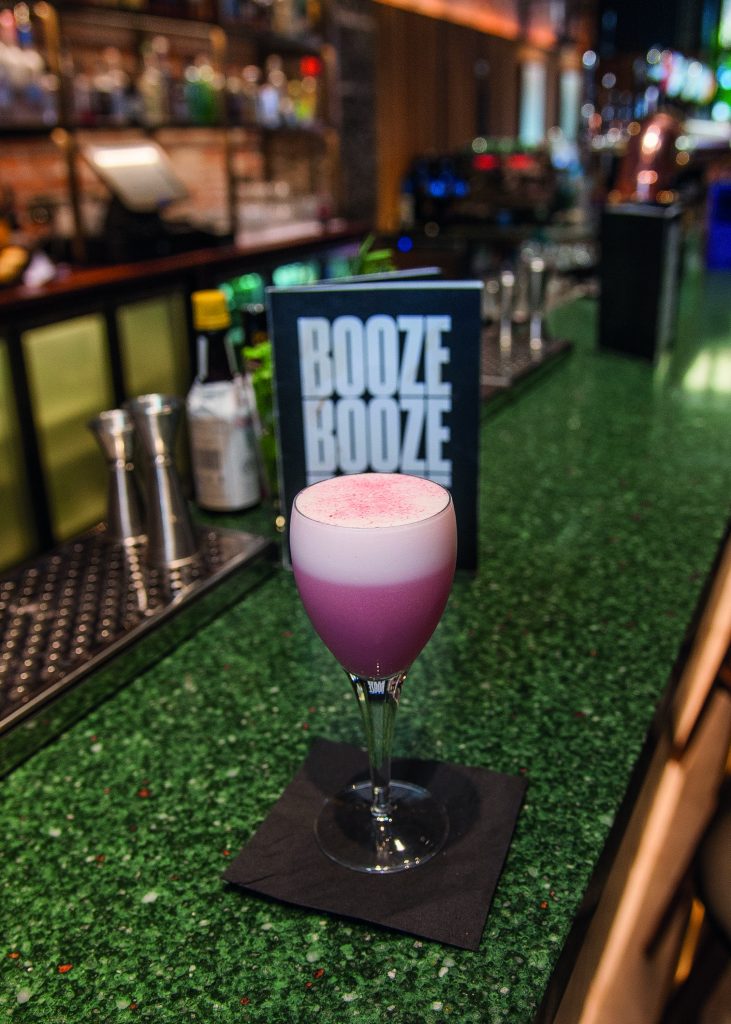 It's all about the food for Darragh

It's all about the food for Darragh