Life is just perfect for Aiobheann

A lucrative legal career beckons for Downpatrick’s Aoibheann Dagens, but for now, she’s more than happy behind the bar at her family’s hotel…

Aoibheann Dagens (25) is so taken with life behind the bar at Denvir’s hotel in her home town of Downpatrick, that she’s put the promise of a career in the legal profession on hold.

The daughter of Denvir’s co-owner, Chris Dagens, Aoibheann holds a Masters degree in law from the University of Manchester but has been working full-time as bar manager at the hotel since the birth of her son, Declan in 2016.

‘I think I just love hospitality,’ she told LCN this month. ‘It has its off days, of course, every job does but I just get loads out of it. I love meeting people and at the moment, my career plan is here.’

Aoibheann got her first taste of bar work as a student in Liverpool when she worked at one of Mitchell & Butler’s pubs in the city. At holiday times, she would come back home and get behind the bar at Denvir’s, where her dad had worked since 2013. Then, when Chris and his cousin, Stephen Magorrian – managing director of The Horatio Group – took the bar on between them, she took a full-time post there as bar manager.

Her job runs the full gamut of hotel bar work and she spends much of her time seeing to customers from behind the bar or tending to staff and organisational issues. Much of what she does, she’s picked up on-the-job although she has participated in several supplier-run training sessions.

‘My favourite aspect of the job is looking after regular customers,’ she says. ‘Just talking to people and finding out a little about their background is great. Colin McIvor, who directed the movie “Zoo”, is a regular and you get lots of tourists coming in. It’s nice to be able to see a little of their lives.’

Denvir’s has been open in one form or another since around 1642 and is now a grade A listed building. It has been extensively renovated over the years but retains a lot of its original character and features.

Aoibheann has responsibility for about 20 members of staff between the various departments at Denvir’s and she admits that sometimes, it can be a little hard to motivate casual staff into seeing the position as anything other than a stop-gap until something more permanent comes along:

‘We spend a lot of time talking to our staff, encouraging them to engage with our customers, particularly the regulars. I think that can give them a boost to their confidence and they can also learn things that will help them whenever they do move on to something else.

As for the future, Aoibheann has no immediate plans to forsake hospitality for a career in law. Instead, she has fixed her sights on ‘some kind of area manager position’. She feels that looking after more than one venue might suit her:

“Stephen [Magorrian] has been a big influence for me, I talk to him a lot and he keeps me right,’ she says. ‘I do have my legal qualifications to fall back on, but I am certain that at the minute, hospitality is the career I want to follow.’

Put two spoonfuls of hot chocolate and one square of Terrys chocolate orange melted in the bottom of the cup with some boiling water. Then add 50 ml of Coole Swan and top with steamed milk. Then toast the marshmallows and set on top of the drink. Enjoy! 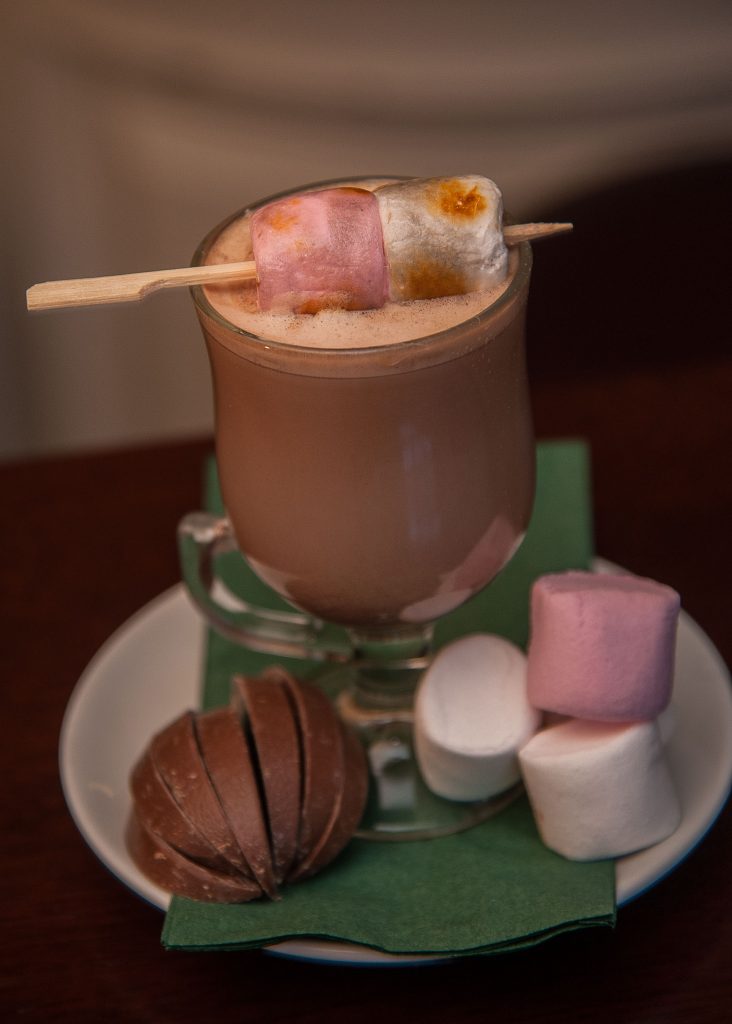 David is glad to be back

David is glad to be back