Darren’s happy at his work

Darren McEvoy at The Albany. And his new cocktail, The Albany Fix.

Twenty-two-year-old Darren McEvoy gave his career a valuable boost earlier this year when he was named as one of three NI winners of the Hennessy Connoisseur title for 2016/17 – a remarkable feat when you consider that he only began bartending on a full-time basis a year ago.

Darren McEvoy’s success in Hennessy’s flagship cocktail competition for 2016 won him recognition among his peers and a once-in-a-lifetime study-tour experience to Hennessy’s Chateau de Bagnolet in France at the end of November.

And Darren’s enthusiasm for his work is hard to ignore. He’s been a full-time bartender at The Albany on Belfast’s Lisburn Road since he realised at the end of 2015 that his decision to study software engineering at Queen’s had been a mistake.

“I’d started to work part-time at The Albany to see me through Queen’s and I absolutely loved it,” he told LCN recently. “But I hated what I was doing at uni, it wasn’t working out for me at all, so I decided to give it up and go full-time at The Albany.”

That was just before Christmas last year and he hasn’t looked back:

“I absolutely love the job,” he says. “Part of it is just working so much with people. You go in during the week and that’s your quiet time. You’ll have your regulars coming in and it it’s quiet, you’ll sit and have a chat with them, it’s like a catch-up. Then, at the weekend, it’s flat out, but it’s a great atmosphere.”

Darren admits that he wasn’t even aware of events such as the Hennessy competition before going full-time in the trade, but he describes the experience of competing – and winning – as “incredible”:

“To win a competition like that in my first year of bartending, I literally couldn’t believe it,” he adds.

Of course, as with most jobs, there are some downsides and Darren says it can be hard to accept that you have to give up most of your weekends:

“You don’t really have those nights out with your mates anymore and that does get to you at times,” he remarks. “But the way I look at it is, you’re still in the same atmosphere, just get your mates to come down here for a drink, it’s not quite the same thing, but it’s not that far off.”

As for any pointers he might be able to offer, Darren says that the ability to cope under pressure is a definite prerequisite, particularly with the busy Christmas period now on the horizon:

“You have to expect that it’s going to be very busy and you just work through it,” he adds. “We do long hours, we get short breaks and sometimes, no breaks at all, and you have to be able to cope with that pressure. 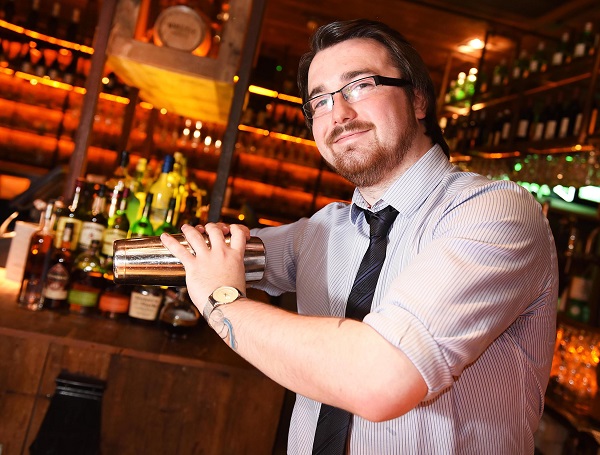 Darren also says that while gin is still “massive” among his clientele, he feels that whiskey is fast becoming “the next big thing”:

“Gin has a limited time left, I think, before it begins to decline a little, perhaps a year or two and I think you’ll see whiskey take over. We’re currently seeing a lot of innovation going on, things like craft whiskey distilling, and that’s going to continue.”

As for himself, Darren’s canny enough to know that experience will be the key to success in his chosen career:

“I’m fairly new to the trade and my plan now is to get as much experience as I can,” he says. “I’ve only been doing this for a year, so I’d like to work my way up, perhaps to head bartender or a supervisor’s role, then stick at it for a whole to get the most experience I can of the different aspects of the job.

“At some point, I might be able to look at opening up something myself, but I need a lot more day-to-day experience of the trade first because you want to do well and you have to know what to expect before you can consider it.”

Mix everything together in your shaker with ice and strain into a chllled glass.Garnish with a twist of blackberry, raspberry and blueberry. Simple!

As you were for Bushmills' Gary