Christopher McQuillan may have initially been a reluctant recruit into the hospitality trade, but the 24-year-old west Belfast bartender was certainly quick to find his feet.

Christopher McQuillan (24) was in the news last month when his No.62 cocktail [see box] won him a place in the UK finals of the prestigious Bacardi Legacy cocktail competition as NI regional heat winner.

But that success finds its genesis many years before in the actions of his brother, Gerard, who worked as a chef in McCracken’s café/bar at Joy’s Entry in Belfast. When Chris was 15, he brought him in to help out in the kitchen and sparked an interest in hospitality that has never abated.

“I absolutely loved the buzz that was in there,” recalls Chris. “I fell in love with the fast pace of everything. I didn’t want to be a dish-washer forever, but I just knew I wanted to stay in the hospitality trade.”

Chris’s career in the industry got underway properly a short time later with a short stint behind the bar at Madison’s hotel in the city. As soon as he had learned the basics, however, he was off to the Fitzwilliam hotel in the city centre. He was also working freelance at the time, waiting tables at events.

“The job at Madison’s had been enough to get me started. I started to read cocktail books in my own time and I saw the success that some of our local guys were having,” says Chris. “When I went to the Fitzwilliam, it gave me a massive boost…it was my first real taste of a professional bartending environment like that.”

After about a year at the Fitzwilliam – during which Chris kept himself busy attending events and exploring the Belfast bar scene – he heard of a vacant position at leading Belfast cocktail venue, Love & Death Inc.

“At that time, that was a really cool bar and staff at venues everywhere wanted to work there. I saw an opening advertised for a cocktail bartender and I went for it,” says Chris.

He was successful and at the age of 20, his career took another leap forward. He’s full of praise for love & death’s co-owners, Anthony Farrell and Brian McGeown and former general manager, John O’Reilly:

“That was a really great period for me,” he recalls. “The guys behind the bar were so enthusiastic and knowledgeable…they were very inspiring and talking to them about cocktails made me think that I had to learn more.

“Anthony [Farrell] was great. He made me aware of how competitions work, he taught me how to approach a cocktail and about the marketing side of promoting your drink.”

Christopher admits that competitions aren’t “a big drive” for him – he only gets involved, he says, when he can match great inspiration with a great idea for a new drink. He was runner-up last year, however, in the NI heat of the Bushmills Cocktail Bartender of the Year competition and he claimed top honours at the recent NI heat of the Bacardi Legacy event.

“Events like these are important because they bring you exposure”, says Chris, “they get your name out there and they let people see what you are capable of.”

During his time at Love & Death, Chris began to eat out much more in the city and as a result, his interest in matching food and cocktails began to grow:

“I fell in love with food and I realised then that I wanted to start working with chefs,” says Chris.

After a brief stint spent working at The Barking Dog restaurant in Belfast, Chris took up a position at Oliver’s restaurant on the Newtownards Road in August where, he says, the kitchen staff are keen to engage with him to help match the food and cocktail menus.

The next big step in his life is set to come in February when he’s off to Copenhagen for a month to work at three-star Michelin restaurant, Geranium.

“I follow a lot of chefs and this place is number 19 on the list of the World’s 50 Best Restaurants. I love their ethos and their philosophy and their style of dining. I just approached them and they agreed to let me do this,” says Chris.

Ultimately, however, like many of his colleagues in the local bartending trade, Chris has designs on a place of his own:

“I’d like to have my own free-flowing, experimental cocktail bar with a laidback attitude and lots of funky music. That would be perfect,” he says.

Shake all the ingredients with ice and serve long over cubed ice in an absinthe-rinsed glass. Garnish with a pineapple crisp and a metal straw. 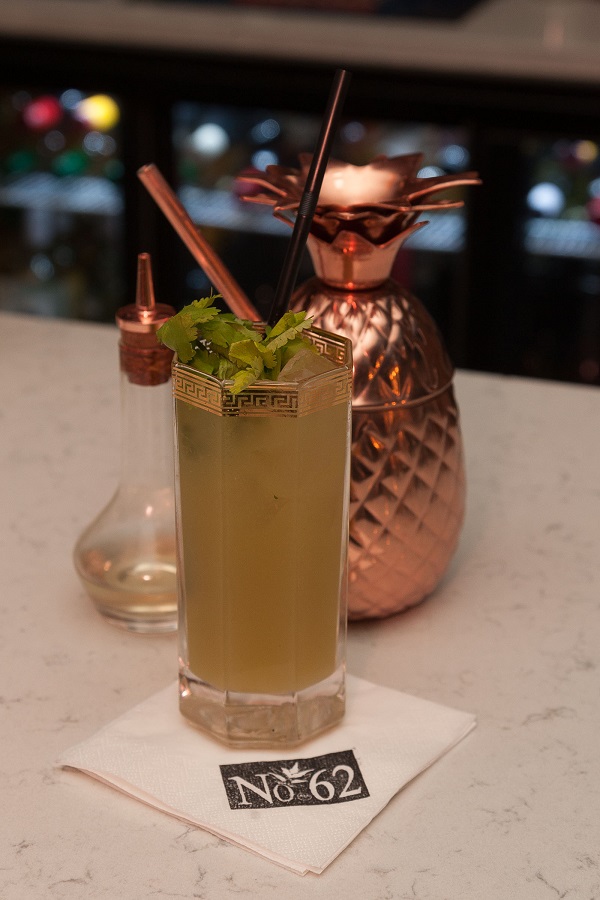 Celebrating two years in business in October this year

Danni takes on a new challenge

Danni takes on a new challenge