Coming from a family with a strong hospitality background, Jordan McGarvey has always been convinced that a job in the trade was for him.

Like so many in the trade, Jordan McGarvey realised at a young age that his temperament and talents were best suited to a career in hospitality.

Although born in Scotland, Jordan (24), moved to Northern Ireland with his parents when he was just five. His father, Edward – who now works as a chef at the Bushmills Inn – comes originally from the province and they moved back here in search of work.

Jordan has lived in the busy seaside settlement of Ballycastle more-or-less since he got here and these days, he’s bar supervisor at O’Connor’s in the town.

In his younger days, he recalls, dad Edward did his best to dissuade his son from chasing a career in the trade. Not easily diverted, however, Jordan eventually overcame his father’s resistance and began clearing tables at the family’s café in Ballycastle, The Bay.

“It felt like  a great job for me at the time and when my family eventually gave up the business, I was able to get another job working at [the former] Restaurant 1608 in Bushmills,” says Jordan.

That was a summer job, he started working in the café downstairs but was soon sent upstairs to the restaurant where he began to do more waitering.

“From then on, I felt like hospitality was the job I wanted to do,” says Jordan. “I thought that this was something that I could be really good at.”

Like many of those people who find themselves drawn to a hospitality career, Jordan did flirt with other career paths initially, studying architecture and construction for a time while working part-time in a Chinese restaurant. He couldn’t shake the conviction that he was meant to work in hospitality though and at 18, he left education and began working full-time in The Deerstalker bar and bistro at Kelly’s, Portrush.

Jordan stayed at the popular venue for the next three years, during which time he gained valuable experience in many aspects of the trade, including bar work, which sparked his interest in mixing cocktails:

“Back then, they were really easy to do,” he recalls. “It was easy to learn how to make the drinks that people wanted, but I started to expand on that and slowly developed a real fondness for mixing cocktails. I began to think about new things that we could develop and add to our menu.”

His current job at O’Connor’s came about following an approach by the owner of the venue, Cormac O’Connor:

“I’d known Cormac for some time and he put me in as lock-up guy, securing the premises for him five-nights-a-week,” says Jordan. “Then he asked me to get involved in doing shifts in the bar and waitering. At the start of the summer, he made me bar supervisor and I’m now in here full-time.”

Jordan’s new role means that he is involved in most aspects of running the bar, including staff rotas and handling money and he also helps to manage the cocktail menu:

“That’s been doing very well and we’re currently looking at how we can make more of it,” he says. “All of our staff are involved in that, some of them are coming to us from bars and clubs in Belfast so they already have great knowledge of what is doing well in those venues.

“At the minute though, we are still very focused on our gin menu. That’s a really big seller for us and we’ve brought in a lot of new gins to cater for demand.

“A lot of our customers are also tourists and they like to try local things so the craft beers have really taken off with them.”

Going forward, Jordan says that he is focused on a management position.

“If I can manage that, it will give me good experience which would allow me to build my career,” he says. “I am very happy at O’Connor’s at the moment, I like to think that I’m making a useful contribution to the business and in five years’ time, who knows where things might lead.”

Chill a martini glass with ice and add the ingredients to a Boston shaker with a scoop of ice. Shake well for 10 or 15 seconds then empty the ice from the martini glass. Double strain the cocktail into the glass and garnish with a fresh raspberry. 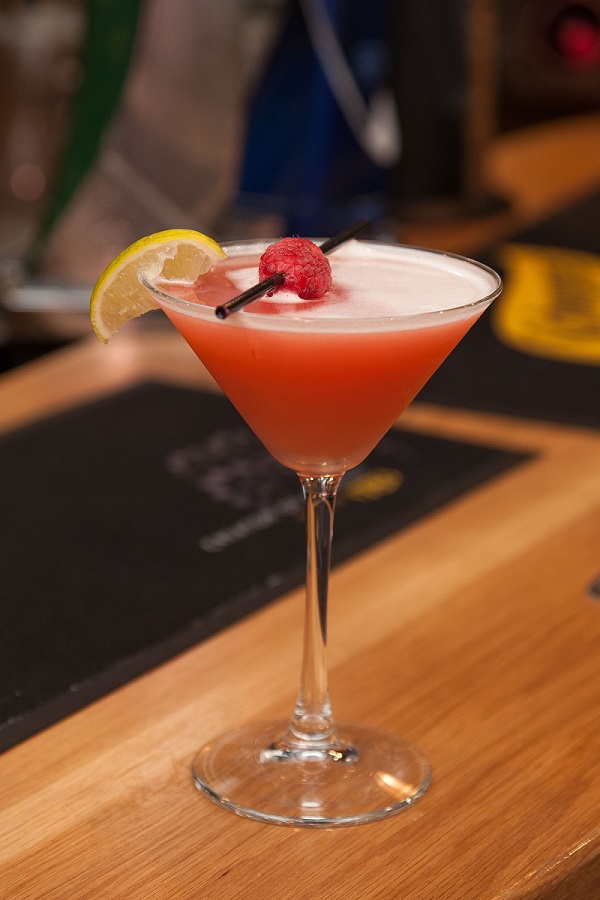