It’s not every day that you come across a bartender who abandoned a career in aeronautical engineering to pursue a new trade in hospitality. But that’s exactly what Ryan McInerney did.

Twenty-four-year-old Ryan McInerney works at the Galgorm Spa & Golf Resort near Ballymena, where he’s a gin bar executive. He’s been at the prestigious venue for the last three years after leaving behind a promising career with aircraft manufacturer, Bombardier, in Belfast.

‘I absolutely hated it, it wasn’t the job for me,’ he told LCN this month.

Until that point, Ryan had no experience of the hospitality sector, but in his quest for a new job, he came across an opportunity for bar work at Galgorm Spa & Golf Resort. He went for the position and was successful, going behind the bar for the first time at the age of 21.

‘I had no experience at all, but I quickly adapted to the job,’ he recalls. ‘I learned how to pour a pint and within a few months, I was going to cocktail masterclasses. I took to it straight away and began to teach myself to make cocktails that weren’t on the menu here.’

Within a year of arriving at Galgorm, Ryan had been appointed bar supervisor. After another six months, he moved up to bar manager and a further six months later, he was appointed gin bar executive. In effect, he’s responsible for everything that happens in the evening gin bar in the Conservatory at Galgorm.

But Ryan’s decision to switch away from a job he hated didn’t just bring him new career opportunities, it also led to romance. Ryan and his girlfriend, Lisa McAllister, met through their jobs at Galgorm and now Lisa works in the gin bar as a manager with Ryan.

‘’She taught me the ropes and I told her everything I could about management,’ he says. ‘It’s worked out really well.’

There has been much positive change since Ryan and Lisa took the reins at the gin bar:

‘A lot of what was in place was good and we’ve kept that, but there were some issues and there were too many projects going on at once,’ says Ryan. ‘What we tried to do was focus just on certain things.’

One of their innovations centres on the introduction of digital menus. There are a staggering 460 gins available at Galgorm’s gin bar and Ryan and Lisa hit on the idea of presenting the guests with their gin options in digital format on an iPad. There are now 17 of the tablets available for customers to browse on in the bar.

‘It’s gone down really well with our customers and it’s something different. Our menu is extensive and this makes it a lot easier for people to find what they’re looking for,’ adds Ryan.

Also, gin flights are about to be introduced to showcase some of the fabulous local gin that is available and there are gin tastings available every day in the Conservatory.

‘The whole gin craze is still growing and we’re currently thinking about changing a few of ours around, just to keep it interesting,’ says Ryan.

‘At the moment, we are very focused on the gin bar’s reputation, we want to be known as the best cocktail bar in Northern Ireland. With this being such a big resort, it can be difficult to stand out and you don’t always have the freedom to  try everything that you might want, there are certain ways we have to do things.’

Ryan is very happy to stay on at Galgorm for as long as he can, but eventually, he says he’d like to own his own bar in Berlin:

‘I’ve been there and I love it. I speak some German and I just loved the freedom of the place. In Northern Ireland, it’s easy to get frown on rather than congratulated. Over there, no-one bats an eye-lid, there’s a great cocktail culture and a great atmosphere. It’s a different world.’ 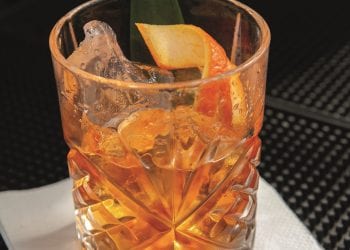 Add the simple syrup, bitters and flamed orange peel into a mixing glass and add ice and the Plantation pineapple rum. Stir for about 20 seconds until its completely chilled and fine strain the mixture into a chilled whiskey glass. Add ice to the glass and garnish with a pineapple leaf and a twist of orange. Enjoy!