Award-winner Steven right at home behind the bar

Now in his mid-40’s, Belfast bartender, Steven Dodds, has spent practically his entire career in the licensed trade – and he’s loved every moment of it.

Named as this year’s LCN Bar Person of the Year, Steven Dodds collected his award during a gala evening at the Europa in Belfast in June, declaring himself delighted with the ‘unexpected’ honour:

Steven, who has been assistant manager at McHugh’s in Belfast for the last five years, added:

‘Working in McHugh’s has been just fantastic and getting to meet new people every day is a great part of the job.’

Steven, who comes from Bangor, first worked in hospitality when he was just 15-years-old. A friend told him about some casual work that was available at the Old Inn in nearby Crawfordsburn and he ended up waiting on tables there. By the time he was 16, he had a set of keys to the venue and was often responsible for locking up.

Steven stayed at the popular hotel until he was 18-years-old and studying for his A-levels, but he admits that he really had no idea what he wanted to do:

‘In those days, it was all about getting a little extra money together for a drink at the weekends with my friends,’ he recalls. ‘But I found that I really liked the work too.’

After a brief stint in retail, Steven found himself at Wolsey’s in Bangor. He initially provided sick cover at the venue, but his clear aptitude for the work quickly led to a full-time job offer and Steven stayed at the popular bar for the next six years.

‘I really did enjoy it, Martin Wolsey was absolutely fantastic,’ he recalls. ‘There was a real family thing there and everyone had their own place within that. It was a real joy to work there, but eventually, I realised that I couldn’t stay there my whole life. I had this notion to go to Canada and I went out there for a couple of months with my girlfriend at the time.’

Ultimately, says Steven, the trip to Canada was something of a disappointment and he was back in NI within a couple of months. The next two years were spent back at Wolsey’s before he took on a post at Coyle’s Bar & Bistro in Bangor, where he stayed for a couple of years.

By then, it was 2005 and in company with a close friend from his Wolsey’s day – Dean Stephens – the pair decided to take on the lease for Belfast’s iconic Rotterdam bar. Running the famous music venue was a dream come true for Steven, who is passionate about music and played in his own band at that time – but the new venture proved to be his biggest challenge:

‘It was a big learning curve,’he admits. ‘I thought I knew everything there was to know about the trade, but I was put right on that within a couple of weeks. It was a lot of responsibility and a lot of pressure, but we were having a really good time too.’

‘From a young age, both Dean and I had known that the Rotterdam was a big name on the music scene and when we took it over, we wanted to make sure that it stayed a music venue of note,’ says Steven. ‘We were successful in that to some extent, just not enough to let us keep the doors open.’

Landlord, Bill Wolsey, eventually sold the venue on for redevelopment and Steven, who admits to being a little disillusioned, moved away from the trade for a while and spent some time in a labouring job. After a few months, he took on a few shifts at McHugh’s in Belfast and ended up on full-time hours, He’s been there ever since. He says that the atmosphere in the bar reminds him a lot of his days at Wolsey’s.

‘I’m behind the bar as much as possible,’ he adds. ‘I like the interactivity and being part of people’s experience, especially if they’re here on holiday. A lot of people, when they come to work in a bar, they forget what it’s like to be on the customer’s side. We’re part of the experience for them. Let’s face it, people aren’t coming to NI for the weather and I know a lot of them are coming over here just for the people.’

As for ambition, Steven is passionate about beer and he’d love to be more involved on the micro-brewing side of things.

‘I’d love that,’ he says. ‘I do a little bit of it at home but I’d love to be able to do something bigger at some stage.’ 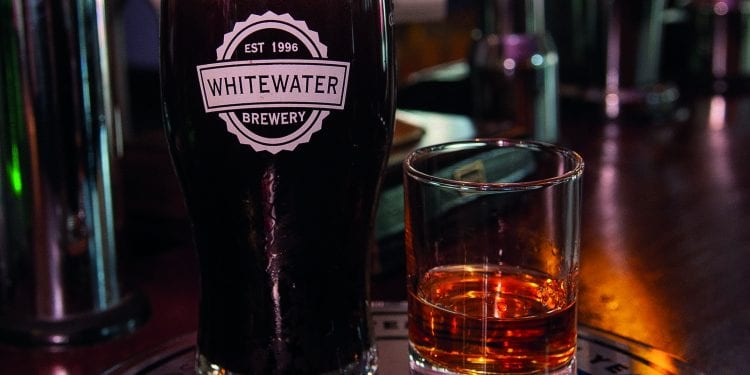 ‘For this, I’ve gone with a pint of Belfast Black stout from the Whitewater Brewery in Castlewellan. It’s creamy and smooth with delicious coffee notes and is supremely satisfying. Also very natural, no artificial colouring or preservatives. On the side is a measure of Yellow Spot whiskey from the Midleton distillery in Cork, very smooth, slightly sweet then spicy.’