When Niall Davis opened his Asian restaurant in Belfast, it was a gamble that very nearly didn’t pay off. Now, however, he’s looking to grow this quirky brand…

For most businesses in the heart of Belfast, the devastating fire at Primark’s Bank Buildings outlet in August last year brought nothing but economic hardship.

But one restaurateur in nearby Fountain Street now believes that the blaze may have been the driver behind a game-changing turnaround at his struggling Asian food business.

Niall Davis (34), is proprietor of Jumon, a 35-seat ethnic restaurant that offers a plant-based menu of dishes from the likes of Thailand, South Korea and Vietnam.

Speaking to LCN this month, Niall described the first half of 2018 as ‘horrendous’ and admitted that when fire broke out at the Primark building in August, he initially believed that his beleaguered restaurant business was doomed to close.

‘I just thought, this is the end for me now,’ he recalls. ‘But people began to come down to this area to support us. Lots of businesses here were struggling, but people who wouldn’t normally come down here, came to help us and the momentum just grew and grew. Now we’re so busy that we’re struggling to keep up.’

Jumon first opened its doors about 18 months ago, but it wasn’t Niall’s first venture into hospitality.

Despite working as a part-time dishwasher in restaurants during his early teen years, Niall initially opted for a career in financial services. In 2009, however, at the age of 24, he left his job and set off around the world, returning to Northern Ireland a year later.

Niall recalls that he was offered his old job back in financial services, but after a year spent travelling the world he wasn’t interested in being confined to an office. He also needed to make some money quickly and so he opted for hospitality, joining the front-of-house staff at the former Potted Hen restaurant in St. Anne’ Square.

At that time, Marty Murphy was head chef at the Potted Hen and he and Niall became good friends. Then, in 2013, they left and set up Howard Street restaurant. That project was – and still is – a huge success, although Marty bought Niall out of the business in 2015.

After leaving Howard Street, Niall took on a unit at Fountain Street and opened The Beringer, a brunch-style restaurant, but by his own admission, the venture was never a success and he closed it in 2017, transforming the premises in Jumon.

‘We knew that people like vegetarian food and there was a gap in the market,’ says Niall. ‘It’s the biggest growth food trend there is, but there are very few places that offer it exclusively in Belfast.’ 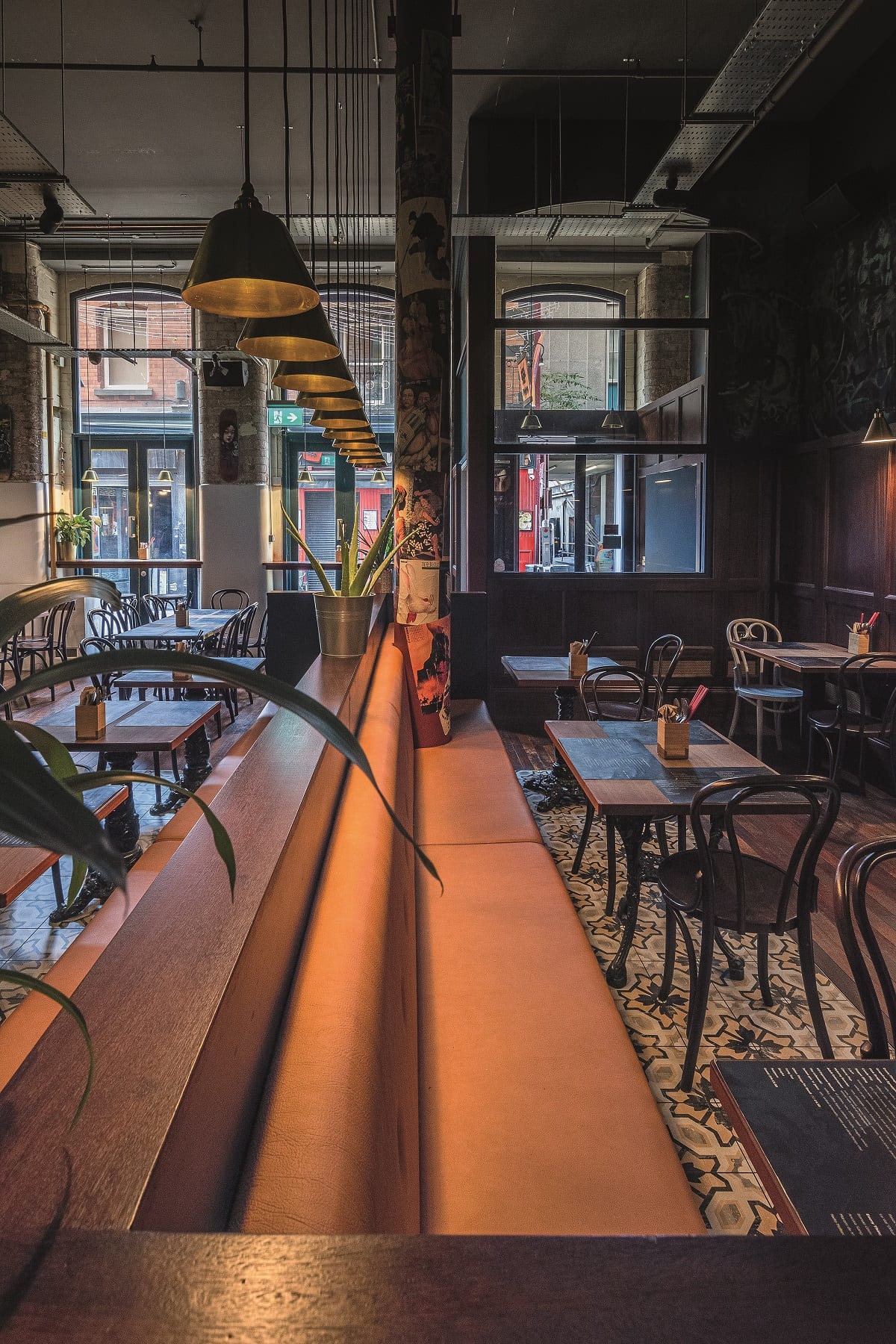 Success wasn’t immediate, however, and Niall does admit that initially, he considered added fish, at the very least, to the menu.

The initial menus were put together by the head chef at the time, Knox, who came from Thailand. She brought elements from lots of different world cuisines together to create a menu unique to Jumon. Today, the current head chef and co-owner of Jumon, Tamsin Harper, has built on and refined those menus to create the present food offering.

‘One of the regrets I do have is that I initially advertised the restaurant as vegetarian,’ concedes Niall. ‘Belfast does love Asian, but I think that we were a bit ahead of the curve when we came out as fully vegetarian. Only vegetarians came in for about the first six or eight months and it was very difficult, but I believed in what we’re doing, the food was super and we persevered.’

‘It’s not just the food, it’s the whole vibe around the place, the interior and the music. It’s lively and the staff are carefully picked to fit in with what we’re doing here. It’s not for everyone, it might be a bit too lively for some, but the people who come here seem to really enjoy what we’re doing.

‘You’ll find dads being dragged down here by their vegetarian daughters and they come in sceptical, but they always leave happy and really impressed.’

As for future priorities, Niall says that he definitely wants to expand the Jumon brand – and not just in terms of more outlets.

‘I want to broaden the ethos of Jumon as a brand and go into areas such as skincare, cosmetics and compostables,’ he reveals. ‘I don’t want to get ahead of myself, but that’s the dream for five years down the line, Jumon as a brand in itself.’

Plans are already in the pipeline for a physical expansion of the restaurant chain. He intends to do at least one more Jumon in Belfast – which he hopes to be able to open next year – and then perhaps, to take the brand to Dublin.

‘I was always confident in what we were doing, it just didn’t transfer to the figures for a while. It was a slow-burner. We were fairly ahead of the curve when we opened, but in the last two years, it has changed so much…’ 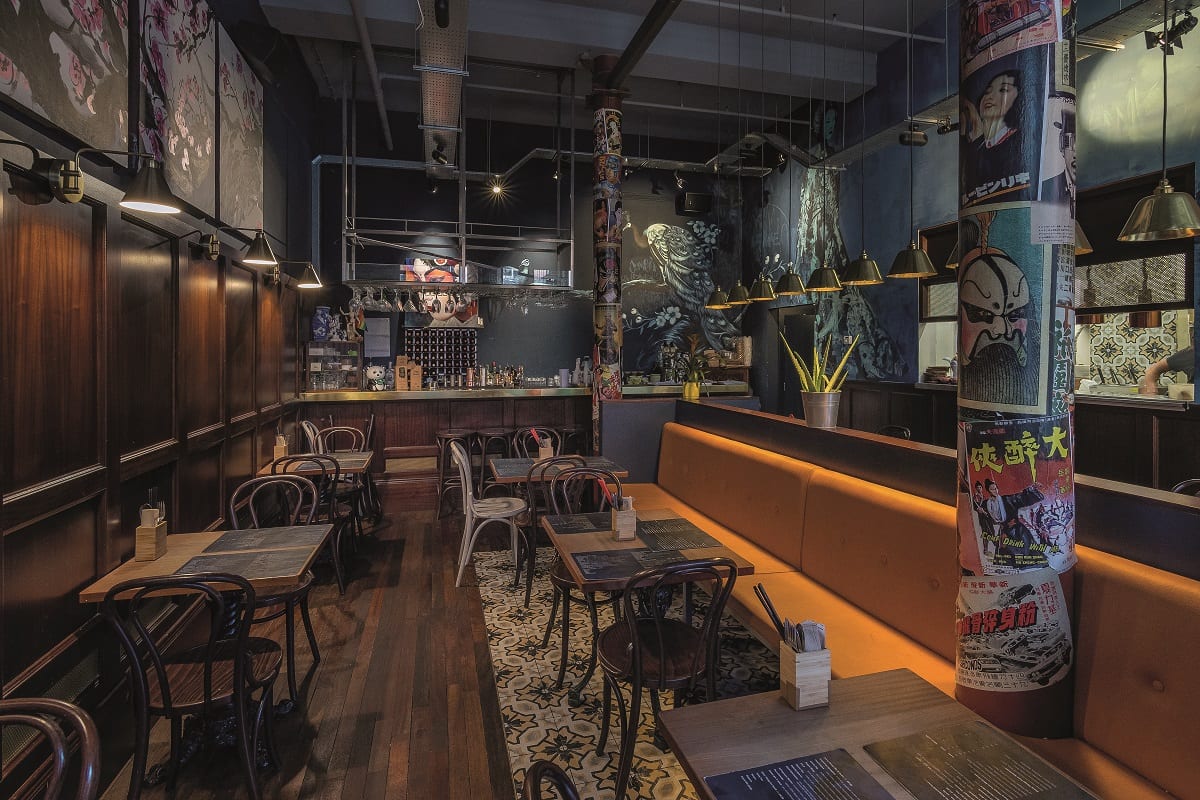