We’re in this together

Cathal Geoghegan is the new-ish head of the Henderson Foodservice, part of the Mallusk-based Henderson Group. Broadly experienced, he understands the need for scale and uniqueness in this increasingly competitive space and believes that a cool head and a plan are the best options for an orderly Brexit.

‘When a ship is moving in the right direction and we’re all focused on growing appropriately and in the right categories, then we can all grow together…’

That’s the ethos driving Cathal Geoghegan’s collaborative approach to business. Now in his sixth month with Mallusk-based Henderson Foodservice, the Galway-born MD is clear that while growth is very much on his agenda, it can only happen in the context of a partnership that involves the entire supply chain.

It’s a topic he returns to frequently in conversation, insisting that when partners have a genuine desire to do business, a mechanism will always be found whereby they can trade.

Diversification is the other key plank in his growth strategy – a clear carry-over from his 18 years with the Mount Charles Group, where rapid product and service divergence has been essential to the company’s survival.

‘We’re expanding categories all the time and now have a portfolio that includes things like non-food, cleaning materials, disposables, consumables and fruit and veg,’ says Cathal. ‘It’s something we have had to do here and we had to do at Mount Charles in order to keep up because our competitors are also growing.’

Cathal Geoghegan arrived at Henderson Foodservice in August as successor to Damian Barrett. As MD at Mount Charles, he had presided over turnover growth of 120 per cent, restructured the senior management team and introduced the business to innovative new revenue streams in the cleaning, security and support services sectors.

He arrives with his new employer at a pivotal time as work continues on the latest phase of a £20m redevelopment of the group’s headquarters site at Mallusk. The work comes on the back of record profits for the Henderson Group in 2017 – up by eight per cent to more than £20m.

In January, the company’s familiar blue warehousing adjacent to the M2 was demolished to make way for the foodservice division’s new warehouses, although these won’t be fully operational until 2021.

The Henderson Group is forging ahead with its development plans despite the uncertain political climate and its potential ramifications for business. Cathal says that while there is certainly great concern across the trade about Brexit and the manner in which it has been handled, contingency plans are being made:

‘We had a meeting of the board of directors last week, there is another planned for the end of January, so we aren’t just sitting around waiting to see what the outcome of this will be, we’re debating it and the potential impact on our business. Then we are formulating action plans and attempting to put measures in place for whatever we think might have to be done. For example, a lot of our vehicles fuel up in the south, but is that still going to be feasible after March 29 or will tariffs be applied?’

Henderson Foodservice acquired Monaghan-based BD Foods in July last year with the aim of strengthening the company’s product appeal in the hotel and high-end restaurant sectors, but the purchase also bolsters its presence in the market south of the border and offers it a valuable additional foothold in the event of a painful Brexit.

Capital investment like this is one element of the foodservice growth strategy, but there is also a focus on human resources and the development of distinctive new products and services.

In the meantime, the foodservice division is maintaining its dual focus on human resources and the development of distinctive new products and services.

‘In order for us to grow, we need to make sure that we have the right calibre of individual in place, but we see now in hospitality, there is a lack of skilled staff, especially in catering,’ says Cathal. ‘A lot of our customers are challenged because they can’t find the people that they need. So what we’re trying to do is develop new products that will take less time in the kitchen and offer savings on labour costs.’

Going forward, Cathal says that he’s ‘extremely confident’ around the ability of Henderson Foodservice to prosper in 2019:

‘We finished on December 18 with a top line of about £113m and our budget this year, inclusive of the BD Foods acquisition, will be £137m. We see ourselves breaking the £200m barrier in five years’ time.

‘There are a lot of opportunities that we know will present themselves to our business in 2019…I’ve just come from a customer meeting with a large hospitality client in Belfast that we work with. We were talking about growth and how, over the last two or three years, we have seen 24 per cent growth with that customer by bringing new categories to the table. Now, we’re looking at new ways of growing going forward that will be of benefit to us both.’ 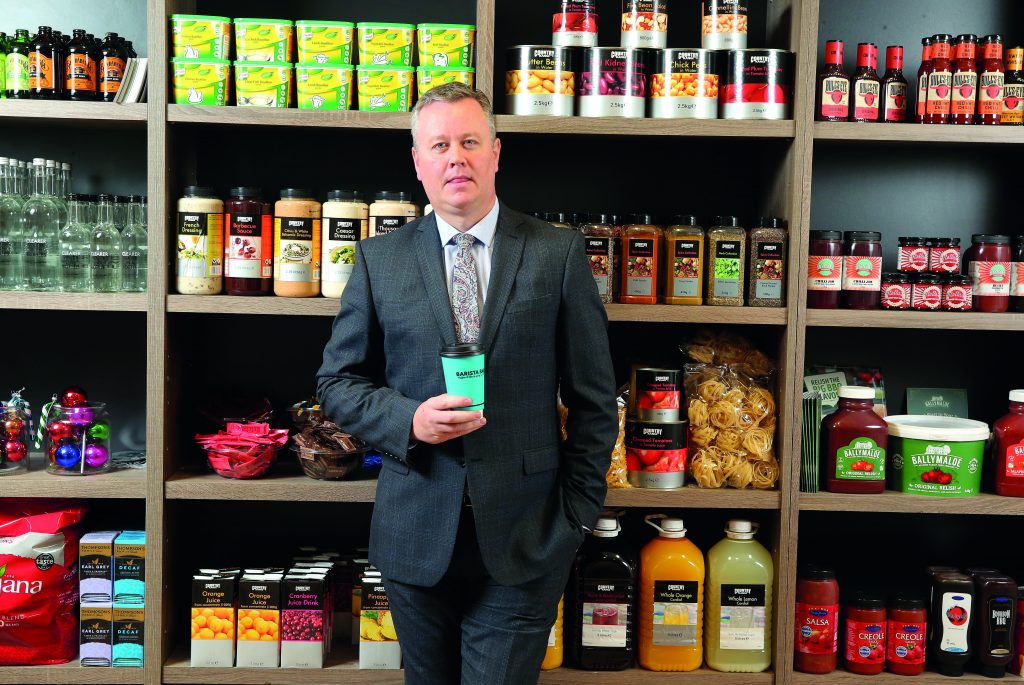 Rising to the challenge

Rising to the challenge