While Belfast live music venue, Voodoo, is a labour of love for its owner, Ciaran Smyth, the realities of trade in the competitive hospitality sector can’t be ignored. In 2019, Ciaran sought to boost income and broaden the appeal of the live venue by adding a brand new themed café/bar in adjacent premises.

A civil engineer by trade, Holywood-born Ciaran Smyth (61), will be familiar to many readers as the music-loving proprietor of Voodoo, a popular live entertainment venue in the heart of Belfast city centre.

Opened in 2011, Voodoo aimed to capitalise on the wave of interest and affection that swept the country in the wake of that year’s MTV Europe Music Awards, which were held at the former Odyssey Arena.

The new venue had a practical purpose too, to provide a much-needed platform for the many talented local performers whose abilities, Ciaran believed, often go unrecognised.

Voodoo has served that purpose well in recent years, offering live entertainment across a range of genres with a particular reputation for heavy rock. Ciaran himself admits, however, that margins at the venue are slim and it was the need to develop its appeal and boost its earning potential that led to a whole new phase of development with the opening of Santeria in 2019, a Latin-themed café/bar in premises adjacent to Voodoo.

Voodoo and Santeria are labours of love for Ciaran, rather than his main source of income. His day job is property development, a career that finds its roots in an old family company, the Phoenix Wine and Spirit Stores Ltd., which, despite its moniker, is primarily a property firm. Founded by Ciaran’s grand-uncle, John Smyth – a pawnbroker with an interest in property – the group took its name from one of the first properties on its books, the Phoenix Bar on the Antrim Road.

By the 1980s Ciaran was working in property management.

Among the properties on his books was a venue in Fountain Street which various operators had taken on and relinquished over the years. Some readers will remember the atmospheric city centre bar, Copperfield’s that traded from the spot for a time in the early noughties.

All of that ‘died the death’, recalls Ciaran. ‘We thought that we could do something with the place ourselves, but the problem with it was that it’s on an interface. How do you normalise that? We believed that music could be the solution.’

Ciaran involved Mickey Brown, an old friend and musician who worked with Ciaran’s son Feargal to put together the initial concept for Voodoo. Capitalising on the positive sentiment that flowed from MTV’s Belfast event, Ciaran hoped the new venue would provide recognition for talented young musicians whose contribution to the local arts scene, he felt, was being largely ignored.

Ciaran’s other son, Eoin, joined them soon afterwards and the project was supported enthusiastically by the whole family.

The success of the venue in the years since have vindicated Ciaran’s faith, but the realities of managing a live music venue such as Voodoo can’t be ignored.

‘It’s a great venue and a great crowd but it all costs money,’ concedes Ciaran. ‘Eventually, I realised that we needed more ground floor space and we need to broaden the offering.’

In 2017, a newsagent’s shop became available a couple of doors up from Voodoo and Ciaran spotted the opportunity he had been waiting for.

‘I had a quick look at the plans and I realised that if we put a staircase at the back of the building, and with some reconfiguration in the venue, we could connect it to Voodoo and extend the liquor licence, so we took the premises on.’

The former newsagent’s shop is now home to Santeria, Ciaran’s latest venue. Opened in July last year, it’s a café/bar with a Latin-American theme. He took the lease for the premises on in November 2018 and set about stripping away all remnants of the old business. Paperwork and the uproar caused by the Primark Bank Buildings fire, however, put the project behind schedule.

The overall scheme involved an investment of around £300,000 although Ciaran and Feargal took the Santeria design work on themselves:

‘Santeria has a loose South American influence, which we felt tied in well with Voodoo,’ says Ciaran. ‘Santeria is a South American religion, just like Voodoo, but what we were after was just a nice comfortable bar where people could enjoy some music and a drink without any real emphasis on one thing or the other.’ 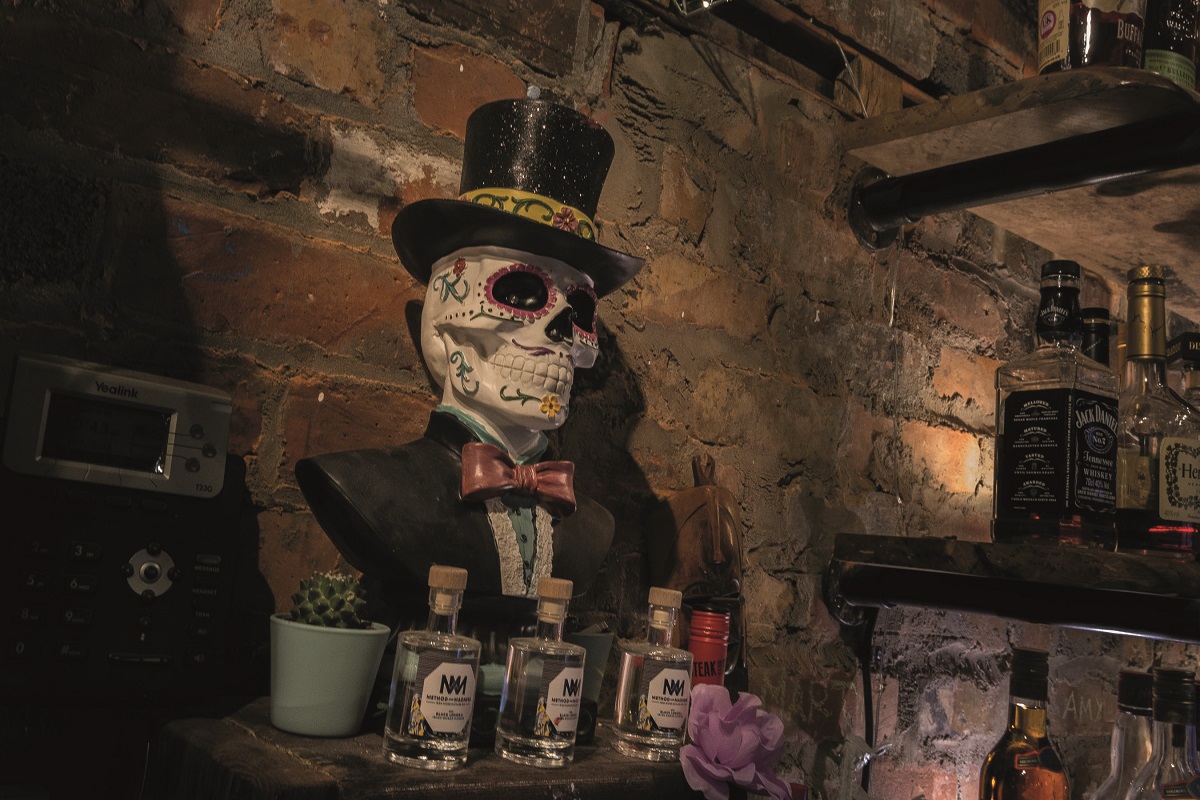 Santeria can do around 45 covers at capacity. It offers a jazz evening every second Thursday and there’s a Latin American DJ on Tuesdays, although the entertainment offering is still in development. A tapas-style food menu is set to be introduced later in 2020.

‘I’ve been very happy with the business so far,’ adds Ciaran. ‘We opened in July and it was a bit of a sweat but it took off straight away. We get a lovely crowd, they come in here for a drink and some would then head down to Voodoo.’

Among the objectives for this year will be boosting daytime business in Santeria. The venue is ‘buzzing’ from teatime onwards, says Ciaran, but he’s keen to see more custom during the day.

‘Long-term, I am 61 and I am very careful with the projects I take on,’ says Ciaran. ‘Certainly, we’d like to take on more in the hospitality industry and I am always interested in the music side of things, not because it makes me money but because I enjoy it. I have a lot of respect for the talent I often see in here which doesn’t always get the recognition it deserves. 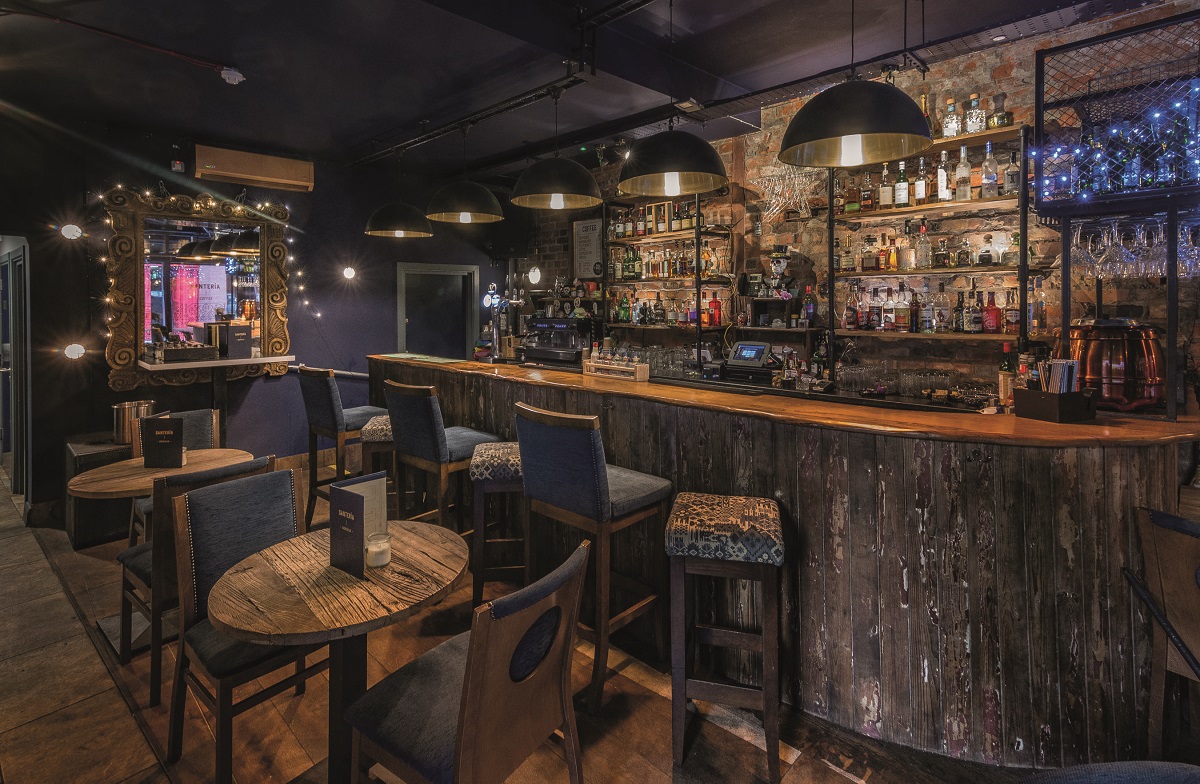