On the Northern Irish whiskey trail

Publican Vincent Hurl’s passion for Irish whiskey is behind the creation of an exciting new initiative aimed at visitors and locals who share his abiding love of the product.

The Bellaghy man has designed The Northern Irish Whiskey Trail – a colourful double-sided map product that can be used by tourists or local enthusiasts to embark on a round-the-province tour of our best distilleries and those pubs and hotels with a special emphasis on Irish whiskey.

The project came into being after Vincent’s plans for large-scale expansion at his own venue – the historic Crosskeys Inn at Toomebridge in County Antrim – stalled in 2011 amid the spiralling recession and the banks’ reluctance to lend cash to small business.

Those plans are now back on track, but in the meantime, Vincent has gone back to full-time academic study in pursuit of a Masters degree in international hotel and tourism management at the University of Ulster  in Belfast – and the whiskey trail initiative forms a big part of his dissertation for that qualification.

But this is much more than a paper exercise. Vincent is convinced that the Northern Irish Whiskey Trail has solid practical applications for tourism in the province and he’s already talking to a number of agencies, including Tourism NI and Food NI, with a view to seeing the trail map officially launched.

“I’ve always had a real interest in Irish whiskey and I knew this was a growing market with great potential for tourism,” he told LCN recently. “This is what my dissertation has been looking at, the contribution that Irish whiskey makes to the tourism industry in Northern Ireland.

“Whiskey tourism is now one of the biggest earners there is for tourism in Scotland,” he added. “Here in Northern Ireland, DETI is aiming to see tourism become a £1bn industry by 2020, but there has to be something to drive that, there needs to be projects that can deliver that and I firmly believe that the whiskey trail can help deliver this.  With over 1.3 million people visiting distilleries in Scotland every year and designated hotels, bars, and golf clubs known as “whiskey Embassies” specialising in the local product and delivering £43m a year of added value to the tourism industry, it’s too big an opportunity to over look.” 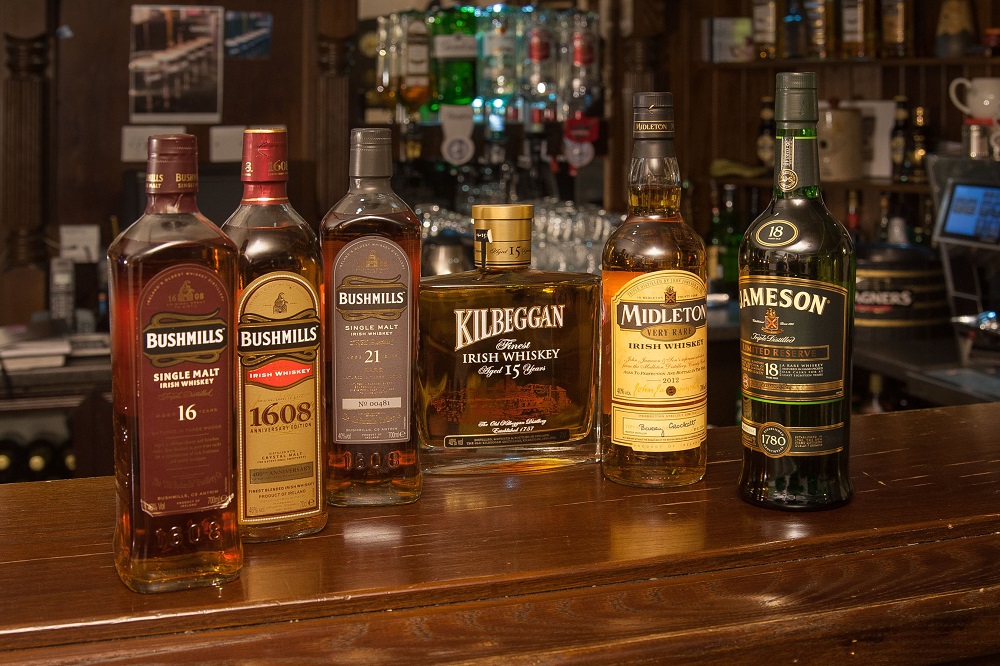 The full-colour map product is double-sided. On one side, users will find a map of Northern Ireland that clearly shows many of our important and artisan distilleries, including Bushmills on the north coast; Niche Drinks in Londonderry; the new Belfast Distillery, which is currently being established at Crumlin Road Gaol in Belfast, Echlinville in Kircubbin and the proposed distillery at Ballyhenry House in Portaferry

Visitors following the trail around Northern Ireland can relax in between distillery visits at pubs and hotels marked on the map that have expressed an interest in developing their Irish whiskey offering as part of the trail experience – these include Vincent’s own venue, The Crosskeys Inn as well as The Bushmills Inn; Johnny Joe’s (McCollums) in Cushendall; The Ponderosa on the Glenshane Pass and The Saltwater Brigg in Kircubbin.

“With Scotland now marketing Golf and Whiskey together in tourism campaigns and with the new Golf Tourism initiative just being announced for Northern Ireland, the development of whiskey tourism can only help deliver on this” added Vincent. “I’ve already spoken to Invest NI and Tourism NI about this and I have talked to Food NI who are very excited about the potential because they feel it ties in well with the Year of Food in 2016.”

On the reverse side of the map, there’s another whiskey trail, this time around venues with a focus on whiskey in the centre of Belfast, such as The Hudson Bar, The Duke of York, The Merchant Hotel, The Crown and Bittles.

“I’ve heard people say that in the city on Sundays, there sometimes isn’t much for visitors to do,” explained Vincent. “The beauty of this trail is that visitors can be provided with a tour to follow that they can undertake themselves.”

Vincent added that – as is the case in Scotland – he would like to see bars in the city having a specially-trained member of staff who would be able to tell visitors more about the whiskey on offer and conduct some tastings.

As for the future of the Irish Whiskey Trail project, Vincent has said that he will be stepping away from it slightly for a brief time while he completes his degree, but he will be maintaining his contacts with tourism and food promotion groups:

“What I’ve been trying to prove is that this is a project that is on our doorstep which a tourist is genuinely interested in. This has been proved by the success of Bushmills Distillery and visitor centre over the years. The project is almost ready to go and it’s going to cost very little, all we need to do is put some infrastructure into place. Once I have the degree out of the way and with the map now designed, I’ll be working on this continuously and I hope eventually, to see the map made freely available.”

Vincent’s own venue, The Crosskeys Inn, is the oldest thatched pub in Northern Ireland and dates back to around 1654. There are plans to add accommodation and a restaurant to the offering and although these have been stalled for some years, Vincent is now hopeful that work will begin on the development later this year.