Renowned local chef, Niall McKenna has opened the doors on his latest project. Known simply as James Street, it represents an amalgamation of two of his most successful Belfast venues. It’s a recognition, he says, of changing times…

Hospitality dynamics are shifting as the sector here responds not only to the growth in visitor numbers but to the constant evolution of customer demand and expectation.

That’s reflected in simple growth, particularly in the burgeoning hotel sector, but also in the flair and ingenuity with which venue owners are re-inventing and expanding their offerings.

Veteran chef, Niall McKenna (47) – whose award winning James Street South eatery has been the toast of discerning diners in Belfast for the last 15 years – is the latest operator to respond to these changing times. He unveiled a £300,000 revamp – and a new name and brand – at his flagship James Street premises recently. 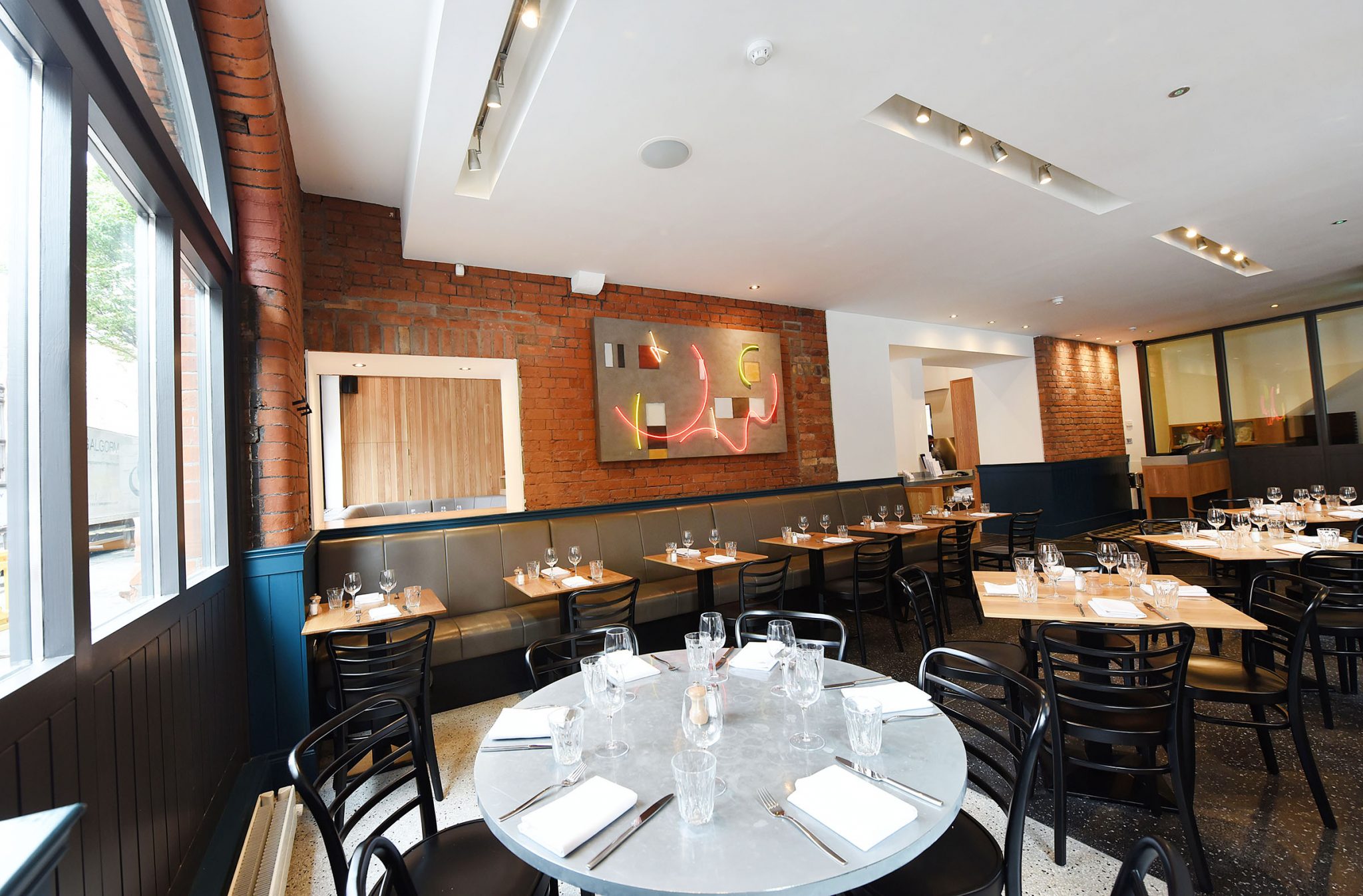 Speaking to LCN at the restaurant recently, Niall said that changes in the hospitality environment in the city meant the offering at James Street had to change:

“It’s purely about business, there is growth in the hotels, in tourism and business tourism and that’s why we made the decision to change,” he explained. “We need to have places that are fun to go to where people want to eat and drink and enjoy themselves. And we needed more space. A bigger restaurant for our corporate business, which is very strong.”

The changes at James Street – which took two months to implement – reflect the wider growth of the Linen Quarter in which the restaurant sits. Niall draws attention to the emergence of new hotels nearby, including the towering Belfast Grand Central and the city’s first easyHotel, and the array of financial institutions and corporate offices which populate the district.

That said, Niall is adamant that he never thought of James Street South as somewhere that people came for “fine dining”:

“We just had linen tablecloths and waiters and we still do,” he remarks. “It was more about having a great wine list and great food. Now, the best bits of James Street South and the Bar + Grill have come together and you can still get a great soufflé. All the great classic dishes are still there, slow-cooked pork, baked Alaska and great steaks.” 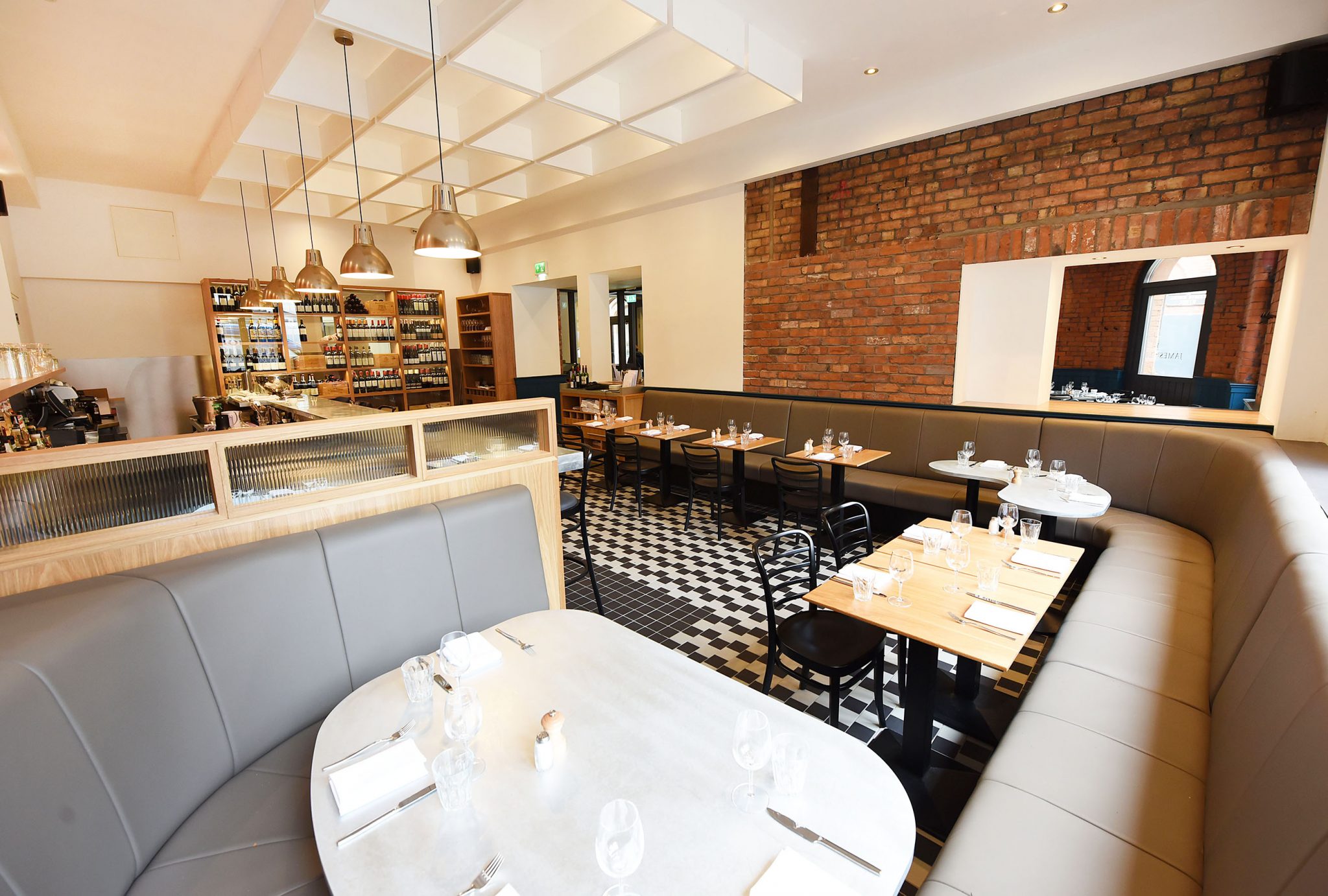 Amalgamating the entire floor space of both former restaurants, the new venue provides seating for up to 90 customers in a relaxed and contemporary setting which includes a bar area and a newly enlarged kitchen space.

The Grill Room is located in space formerly occupied by James Street South restaurant and it acts as an overflow to the new James Street restaurant itself, which it sits alongside. It has its own bar area and can be hired for private functions.

“I wanted the whole place to look modern,” says Niall. “I am very much into minimalism and simplicity, but I also wanted it to be somewhere that you could touch and feel. And I was after cleanliness, you can’t hide anything in here.

“To me, a place like this has to be about everything, the quality of the glassware and plates, the knives and forks. Everything that the customer touches has to be quality.”

Niall says that his walk-in trade is “very strong” and he attributes this squarely to the increasing number of visitors in the city. He’s full of praise for the efforts of TourismNI – it’s doing “an amazing job”, he says – but he’s less certain about the impact of the UK’s impending withdrawal from the EU:

“Virtually all our foreign staff have now gone and we’re finding it very tough,” he concedes “But what can we do about it? The staff we have here now are unbelievable and we work hard to keep them, but there are so many hotels and restaurants in Belfast now.

“Being realistic, every business has to be able to stand on its own feet. This is about making sure that everyone makes a profit and I think that this investment reflects my own faith in Belfast and what is happening here.” 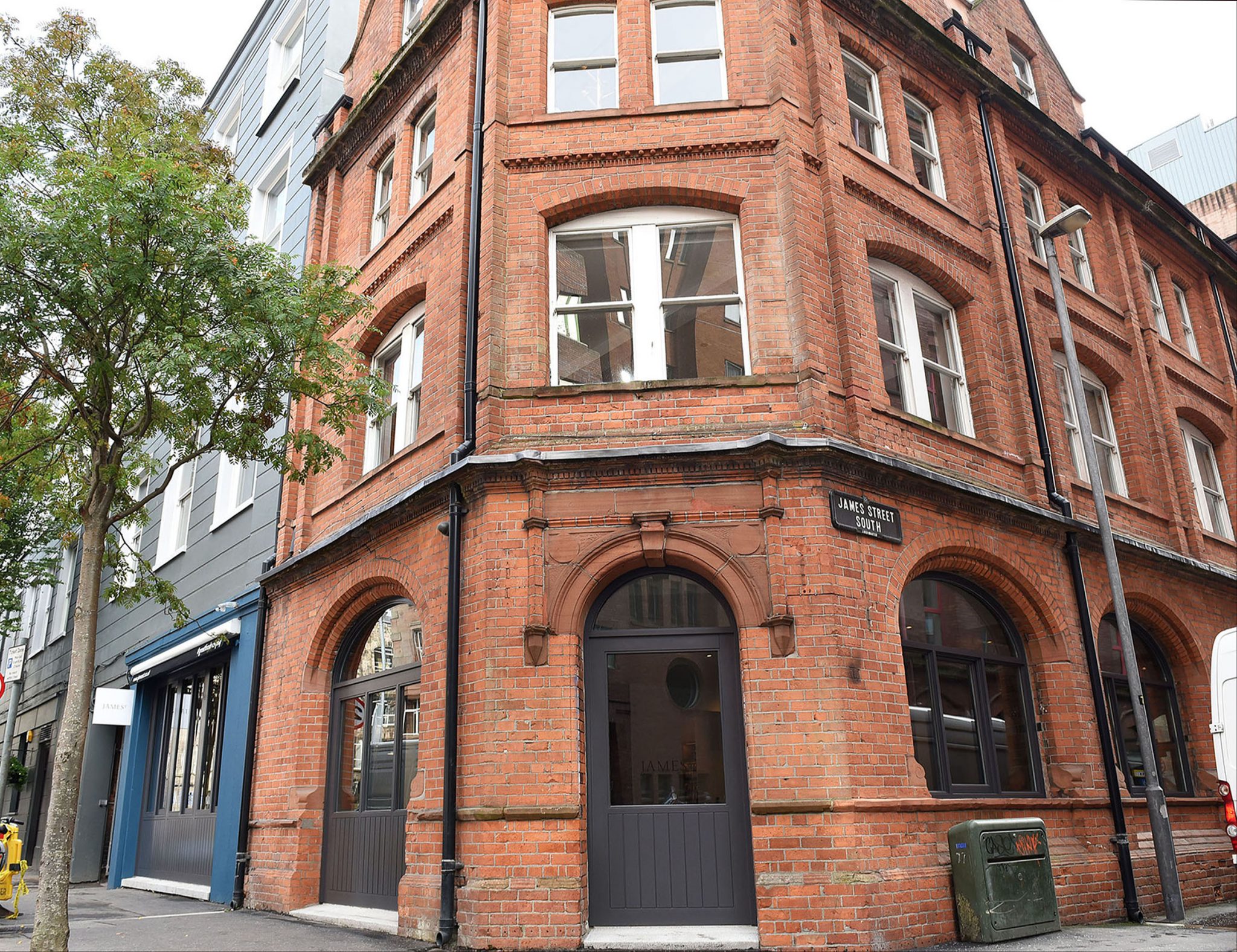 Niall says that feedback on the new premises has been “very positive”.

“Atmosphere seems to be the key thing,” he says. “That’s what people are telling us, along with the service and the food. Some people were worried that this was going to mean a massive change, but that’s not been the case. People love the way the new place looks.

“We have a good, strong base clientele and we always listen to their opinions and value them, they are very honest with us and that’s why we are where we are.”

As for the immediate future, he says he will be focused on ensuring that the customer experience remains at a high level, that staff training is assured and that no opening day gremlins remain in the restaurant’s systems.

More broadly, he reports that Cast & Crew, his quirky eatery in the Titanic Quarter, has enjoyed a strong summer and that his Cathedral Quarter restaurant, Hadski’s, is also doing well:

“It’s an amazing place, great fun,” he says. “It’s a long room and you can see down to the open kitchen, which people really love. You get a lot of interaction with customers, people asking about the food where the good pubs and clubs are. It’s a great way of advertising what’s great about Belfast.”

Niall describes himself as “a total optimist”. He runs the business in tandem with his wife, Joanne, who he refers to as “a visionary”, the person who ultimately decides whether or not projects will go ahead.

The pair’s next scheme is a dedicated cookery school. Catering for groups of up to 18 at a time, it will form part of a new round of regeneration in the city’s Cathedral Quarter. 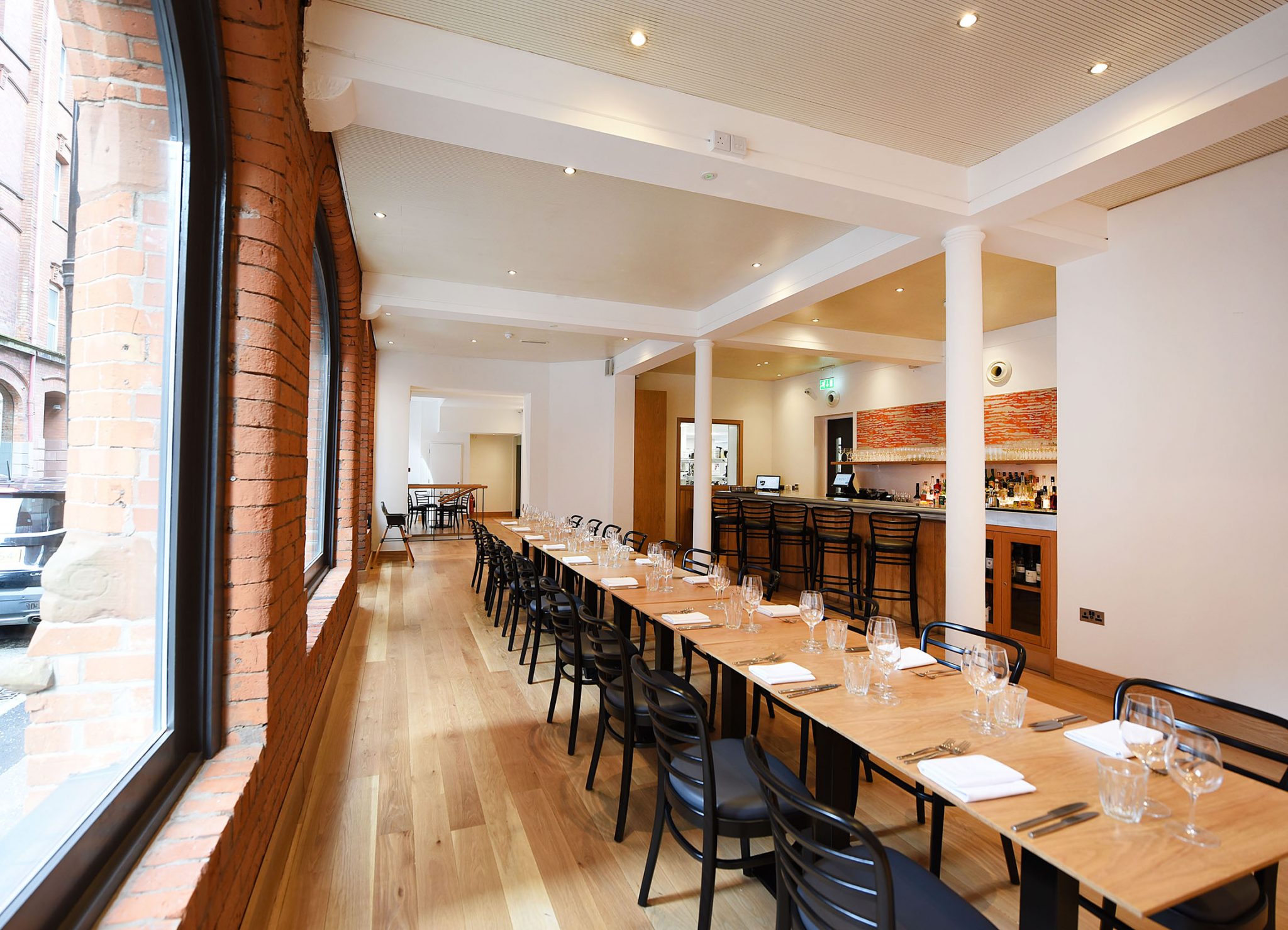 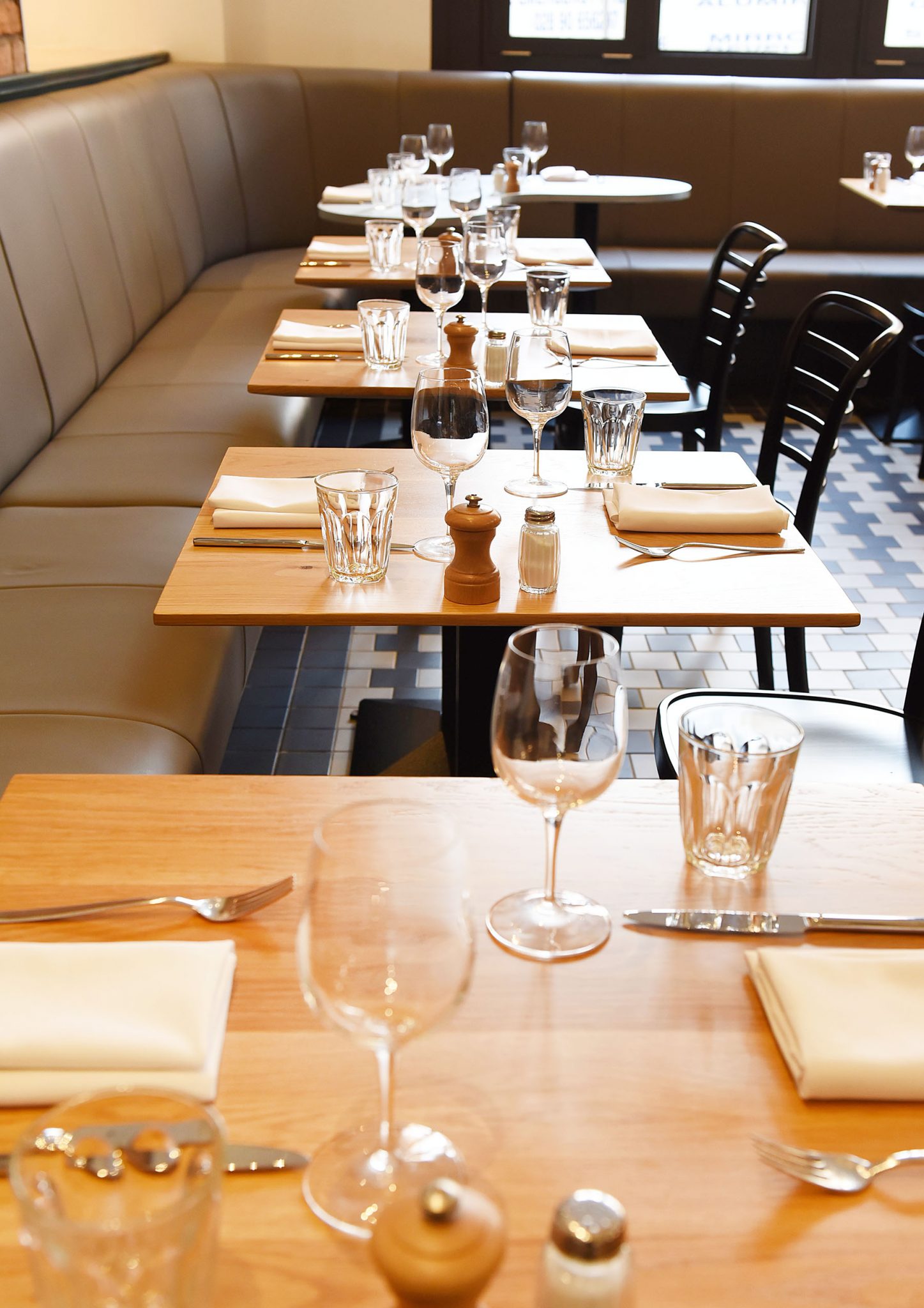