An exciting new boutique hotel project could come just in time to save an old Belfast landmark. The well-known duo behind plans for The Marquis have been talking to Russell Campbell…

Plans for a new £6.5m boutique hotel in the heart of Belfast could kick-start transformation in a run-down area of the city and guarantee the future of a crumbling architectural gem.

The 78-bedroom Marquis Hotel – which will include a four-star French-style bistro and a Parisian-inspired outdoor courtyard called The Orangery – is to be located on the site of the former RUC station at Queen Street in the city.

The men behind Belfast’s latest high-end hotel project – Andre Graham and Seamus Sweeney – hope to submit a planning application in the middle of next month. If the green light is given, it’s envisaged that construction work could begin on the site by September this year, with a view to opening in time for Christmas 2020.

Andre and Seamus will be familiar to many readers as the former owners of iconic Belfast nightclub, The Kremlin, which they sold on in 2014. The pair, who now run Big Top Productions, have been busy in recent years developing projects outside Northern Ireland, particularly in Glasgow where they are focused on the serviced apartment sector. But speaking to LCN this month, New Zealand-born Andre Graham revealed that both he and Seamus were delighted to be working in Belfast again:

‘We’ve been waiting for some time now for exactly the right opportunity in the city and we believe this is tailor-made,’ Andre said of the Marquis plans.

The listed building on Queen Street that will form the core of the new hotel first opened its doors as a children’s hospital in 1878 but had been used as a police station from the 1930s onwards, eventually closing its doors to the public completely in 2000.

In the years since, however, time and the elements have taken their toll on the fabric of the old structure. Andre Graham confirmed that the structure has been in the ‘at risk’ register since 2006 and says that unless remedial work can be quickly carried out, the whole building is in imminent danger of collapse.

‘Unless things move relatively swiftly, we fear that this historic gem could be lost forever as it is in danger of complete dereliction,’ he added.

With that in mind, Big Top Productions has decided to pre-empt its own planning application and act now to save this piece of the city’s historical heritage. Scaffolding will be appearing at the site very soon as efforts begin to halt the building’s decay and in a bid to expedite the development work once it gets underway, Big Top’s architects, Belfast-based RPP, are already working with the NI Environment Agency to ensure that their plans are in accordance with relevant regulations. 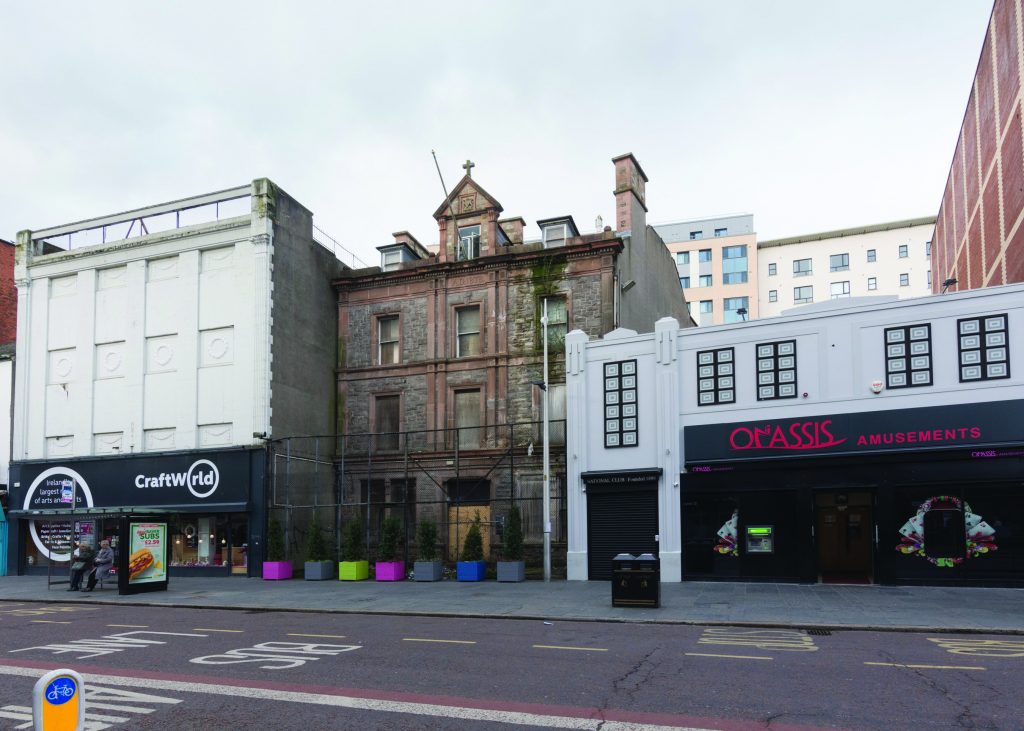 Andre and Seamus first became interested in the Queen Street site about 18 months ago when they were approached by contacts at property firm, Colliers:

‘They told us that they had something we might be interested in,’ recalls Andre. ‘They said it wouldn’t be an easy proposition but we might like it. When we saw the building, we initially thought that it would be a difficult project to get off the ground, but then we found out that outline planning permission had already been granted for 38 apartments on the site. We got the plans and looked at them and at that point, we began to think that this might be possible.’

The old hospital building itself, which fronts the site, will account for around 25 per cent of the new hotel’s floor space once the development is complete.

‘We’ll be retaining some original features, including the lovely central arches that you see when you come through the front door, but many of the old features of the building were already removed when it was being used as a police station,’ says Andre.

As many as 60 new jobs are expected to be created once the new hotel is ready for business.

The Marquis takes its place in ongoing plans to develop the Queen Street region of Belfast – one of the city centre’s last remaining ‘quarters’. The land between The Marquis site and the new Ulster University student accommodation block is to be redeveloped by Belfast City Council into a cobbled green area and there are plans in place for a serviced apartment development, another branded hotel and high-end government offices in the area.

‘Although the area is presently a bit tired, over the next few years, Queen Street will be transformed, providing an unrivalled central location for visitors and The Marquis will be at the very heart of that,’ says Andre. ‘You only have to look at the transformation of Cathedral Quarter over the last decade to appreciate the potential.’

Growth in the hotel sector in Northern Ireland and in particular, in Belfast, has been unprecedented over the last 18 months or so but Andre Graham says that he and Seamus are confident that sufficient demand will exist for additional rooms. Even if all the hotels currently planned for Belfast end up opening their doors, he says, there will still be a deficit in beds:

‘Because of the Troubles here, we are very much under-resourced in accommodation and that’s why, until recently, we have had such growth in room rates and occupancy, the highest in the UK,’ explains Andre. ‘But that’s not sustainable, this rapid growth will catch up to the deficiency…We feel that in the next two or three years, there will be a reduction in room rate and occupancy levels and we’ve factored that into our plans. But it will grow again after that, it’s all about supply and demand.’

As for priorities, Andre says that he and Seamus are currently focused on securing planning permission for The Marquis:

‘It’s a fraught issue’, he laments, ‘not just for us but for businesses everywhere in the UK. Planning throughout the UK is not progressive, it’s very challenging and when you should be focused on developing your model, you’re left waiting with bated breath to see if you have permission, it’s a very difficult process.’

In the longer term, the pair refuse to rule out a return to the club scene here, although Andre says that there would have to be a change in NI licensing laws before that could happen – the status quo around liquor licensing here is, he says, ‘the biggest thing that hampers this sector’.

They are also looking to develop their serviced apartment model and have said they would consider Belfast if the right opportunity came up:

‘Our business is developing more on a UK basis, but Belfast is our home and this is where we will be staying,’ said Andre.